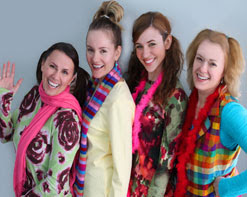 Karlzen is best known for her Atlantic Records album Yelling at Mary and performing with awe-inspiring artists such as Bob Dylan and The Indigo Girls, but she claims “having kids changed my perspective on everything, including music.” She decided to take her ideas on children’s music to a whole new level, so she inspired band mates Rodee and Nickerson to enroll their talents into the project, and thus launched The Chickadees career in children’s music. The band’s first album Songs from the Great Outdoors received a Parent’s Choice Award in 2009, and since then, their second album The Froggy Hop has been inspiring children everywhere to value the importance of education. It is with their video for “The Tadpole Wiggle and the Froggy Hop” that we can get a taste of all that the music of The Chickadees encompasses. Full bio HERE!