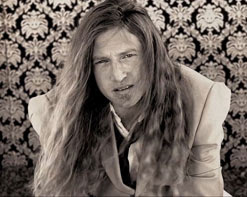 Hello programming pals, it’s Andy Gesner and the gang at HIP Video Promo, pleased to introduce the electrical presence of Aaron Orbit, who comes off as natural and maybe even a bit surprising in his melodic performances and heartfelt lyrics. His debut video for “Prove Me Wrong” is the perfect introduction to an artist who has reached new critical heights with his new album Sunday Morning Murder Songs.

The Southern California native became infatuated with the sound of music at an early age. Picking up the guitar during elementary school proved to be nothing close to outlandish, and he began to split his time between homework and gigs on the Sunset Strip. He had memorable stints in several bands including 8STOPS7, who were a part of the Warner Music family and Le Meu Le Purr. 8STOPS7 was a well established act that enjoyed a loyal fan base, and from there Orbit pursued a more experimental approach with Le Meu Le Purr. The band received rave reviews for their extensive CMJ and SXSW performances but shortly before the band’s first record was to be released, the shifting music industry freezed the release of Le Meu Le Purr’s record. The band performed nationally, wooing music fans everywhere, but the band took a short lived hiatus. It was during this hiatus in 2011 that Aaron Orbit unlocked his successful solo career. With a spur of dramatic changes in his personal and professional life, Orbit began writing music that offered no worry in regards to beholding the likes of any music genre.

Orbit’s music hit Satellite Studios in Ventura at the beginning of 2012 with a rotating back-up band. By the careful selection of specific musicians, his album Sunday Morning Murder Songs a compilation of musicians that compliment specific songs, eventually containing over twenty different artists on the record. Sunday Morning Murder Songs is a twelve track record consisting of songs that range from hook-filled 80s music to the dramatics of artists such as David Bowie. The exceptional songwriting of the album landed advance reviews in local press such as VC Reporter, claiming that the album is “a career defining release by one of the area’s most important artists.” The level-headedness of Orbit’s music offer influences by artists such as Michael Jackson and Mike Patton, and this raw and natural energy that Aaron Orbit creates can be seen in his debut video “Prove Me Wrong.”

“Prove Me Wrong” is a song that captures an energy that is inspirational and undeniably raw. We watch as Orbit sits in front of a camera within a room of his own, strumming an acoustic guitar, attacking bookshelves and personal items as he calls out feelings many of us have certainly felt in our own lives, all the while staring straight at the camera. Full bio HERE!