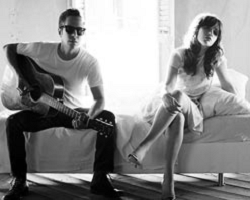 After 20 solid years of promoting music videos, many of our videos have skyrocketed to the top. Today, we present you with one of our most-watched videos on our Youtube channel. She & Him, an outstanding duo, make another addition to our series with “Why Do You Let Me Stay Here?” which was released in July of 2008 and gained over 52K views to date.

It’s almost impossible not to know who actress Zooey Deschanel is. In the 2000s, she won over the hearts of Americans everywhere with her lead role in the romantic blockbuster 500 Days of Summer. She later went on to make the public laugh hysterically with her award-winning sitcom New Girl. But while Deschanel was scoring big in the world of acting, she was also causing waves in the music world with her duo, She & Him. The group’s brand of easy-going indie pop has been applauded by multiple publications for its wistful sensibilities and even went on to be Grammy-nominated for its portrayal in the 2011 Winnie The Pooh movie. Deschanel’s work in She & Him has been recognized as a staple in the indie world and offers a sort-of tenderness to the scene as a whole.

Hitting around two-and-a-half minutes, “Why Do You Let Me Stay Here?” is a dark-humored take on the light and airy country-esque pop that She & Him proved to be infatuated with at the beginning of their career. The story follows Deschanel as she emits a Disney princess aura with actual cartoon birds floating around her only to face a grim demise and be splattered on the floor. Soon after, she arises and tries to lighten the mood by donning a cowgirl outfit, but is nonetheless surrounded by cartoon ghosts haunting her every move. It’s a battle between the morbid nature of death and the perpetually positive outlook of Deschanel and her cheerful singing. The contrast of the two powers works to create a video that invokes a sense of humor that is tongue-in-cheek and playful to the eyes of the viewers. She & Him prove to entertain fans in multiple interpretations.