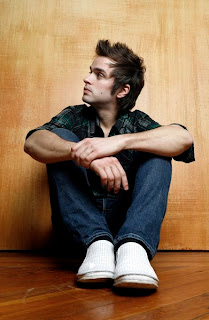 Armed with braces and her token disarming smile, Ugly Betty’s at it again with the falling in-love-thing–this time with a guy played by celebrated Jersey guitarist Val Emmich. I know what you’re thinking–oh God, another music artist gone actor. And you’re thinking Jennifer Lopez.
But Val Emmich has said he only acts except to get by and to pay his way through college. Music continues to be his first love. Check out an article on him by The New York Times. And don’t expect any cessations in his musical career. He’s still going at it.

In fact, Val Emmich is coming out with a new album in September titled
Little Daggers, a fun record with tight, head-bobbing pop numbers. His songs contain bright, Spoon-like piano strokes, lush guitar, and, of course, his outstanding voice. He also mixes in a blend of other instruments into the mix, instruments not used often in rock n’ roll, such as a saxophone, trumpets and viola.
This album is also one of the few albums that I know of that you can listen to at any time, no matter what you’re feeling. It’s not entirely happy, nor depressing–you could bump along in the car with it, or sob with it in your room with the door closed. It doesn’t matter. Val Emmich has a homey, I-know-what-you’re-going through touch to all of his songs. He’s real. He’s natural. He doesn’t pretend. And–we can all tell. It’s refreshing, considering the state of the music industry these days.