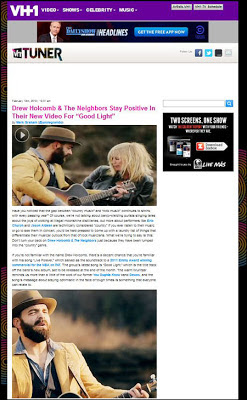 Boy are we excited to be working the promotion of Drew Holcomb & The Neighbor’s fantastic brand new video, “Good Light”! The good folks at VH1 and CMT are well aware of the band’s brilliance too, as they just premiered the video on their official websites, VH1.com & CMT.com. Check out this awesome write-up via VH1.com:

“Have you noticed that the gap between “country music” and “rock music” continues to shrink with every passing year? Of course, we’re not talking about banjo-wielding purists singing tales about the joys of working at illegal moonshine distilleries, but more about performers like Eric Church and Jason Aldean are technically considered “country.” If you ever listen to their music or go to see them in concert, you’d be hard pressed to come up with a laundry list of things that differentiate their musical outlook from that of rock musicians. What we’re trying to say is this: Don’t turn your back on Drew Holcomb & The Neighbors just because they have been lumped into the “country” genre.”

“If you’re not familiar with the name Drew Holcomb, there’s a decent chance that you’re familiar with his song “Live Forever,” which served as the soundtrack to a 2011 Emmy Award winning commercial for the NBA on TNT. The group’s latest song is “Good Light,” which is the title track off the band’s new album, set to be released at the end of the month. The warm Wurlitzer reminds us more than a little of the work of our former You Oughta Know band Dawes, and the song’s message about staying optimistic in the face of tough times is something that everyone can relate to.”

We predict Drew Holcomb will be a household name by the end of 2013. We’ve been known to make predictions like this that have come to fruition. Ahem.. have you heard of The Lumineers?  Okay, okay…

Get on this train early. Trust us.

Make sure you check out the band’s official website for the latest on all things Drew Holcomb. The band’s new album, Good Light, drops everywhere Feb 26th, but you can get yourself a copy one week early via iTunes Feb 19th! Spread the word, y’all!