Show Alert: The Trews @ The Bowery Electric & Maxwell’s Next Week 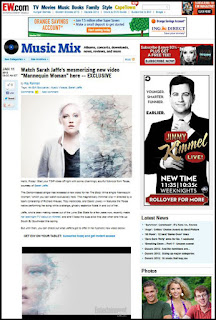 Hello, Friday! Start your TGIF vibes off right with some charmingly soulful folk-rock from Texas, courtesy of Sarah Jaffe. The Denton-based singer has released a new video for her The Body Wins single “Mannequin Woman,” which you can watch exclusively here. The magnetically minimal clip — directed by a team consisting of Richard Krause, Toby Halbrooks, and David Lowery — features the Texas native performing her song while a strange, ghost-y essence floats in and out of her.

Jaffe, who’s been making waves out of the Lone Star State for a few years now, recently made her late-night TV debut on Kimmel, and she’ll keep the buzz alive this year when she hits up South By Southwest this spring.

Head over to EW.com to watch it now!