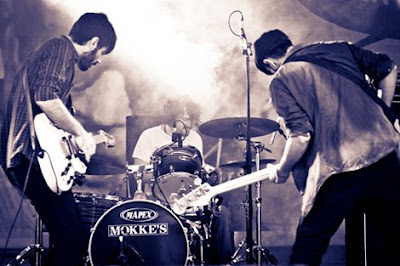 The R’s have turned up their sound and creativity to 11 with the release of their awesome album De Fauna et Flora. “Call Of The Ice” is laced with an array of crazy organic sounds including wood blocks, organs, ukulele, and various triangles and bells. The song is given a slightly Spanish meets Western vibe with upswing of the drums and the southern reverby twang of the lead guitar riffs. If “My. Hide” hinted at The R’s affection for David Bowie, “Call Of The Ice” further solidifies this notion while expanding their broad palette. While the last few clips found the band in some pretty neat, yet earthly settings, the group decides to ignore the barriers of space and time for their second single. The clip takes place thousands of years into the past, as the trio is cast as ancient warriors riding a wild stampede of prehistoric oxen. Each member is completely painted jet black from head to toe, and covered with tribal markings. At the center of the clip is an ancient pagan goddess who calls to the warriors from space, giving the whole clip a Dr. Manhattan from The Watchmen movie feel. It’s time “Knights of Cydonia” took a break and let this barbaric and vivid universe rule the music video realm.

P.S. – If you’re wondering why the name sounds mildly familiar, it’s because The R’s were formerly The Records, a successful Italian indie rock group.