Anarchy in the UK with Ten Kens!

Chris Marsol: Not so easily defined 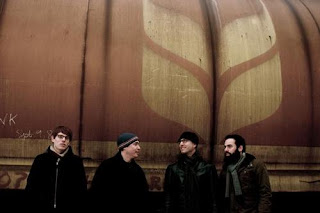 Well, not exactly anarchy.
They are touring the UK, partnered with A Place to Bury Strangers, but Ten Kens is not punk. Nor do they sneer. But they are often loud, creating a wall of sound that has had indie rockers on their knees since their debut last year.
(So the headline is justified. I think.)

They’ve been compared to notable noisy band Jesus and Mary Chain, as well as other noisy, stylistic rockers that joined Sonic Youth in the nineties to create the ultimate artsy music–and the ultimate snarky lyrics.

Ten Kens is not alone in expanding and creating new tracks in the tradition of these nineties kids.

A Place to Bury Strangers, their touring partner, rubs in My Bloody Valentine influences among ripping riffs. They’re a great match for each other.

And they’re in the UK this month–check out some dates and locations on the Ten Ken’s Web site.