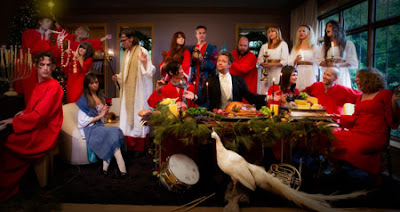 Always one to go above and beyond for their audiences, “Silver Bells (Reprise)” is just one of several upcoming video clips from Holidaydream and Polyphonic Spree presents the vision of holiday cheer in the warmest welcoming fashion. Lead singer DeLaughter is seen whimsically dancing around throughout Santa’s workshop where Holidaydream LP records are being made (which is actually a real pressing plant in Dallas). The classic approach to the holiday season makes this video seem like it’s from another time, promoting the original holiday fashion. Dressed in a wardrobe straight out of A Christmas Carol, DeLaughter merrily excites Santa’s helpers who are diligently getting ready for the holiday season by packaging copies of Holidaydream for all the good boys and girls. Click HERE for the full bio! 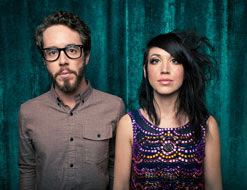 Smile Smile, the Texas pop duo, has an irresistible charm, having had their songs aired on MTV’s dating show NEXT, and featured in the cult comedy Jack and Jill vs. the World. They’ve taken their act across the country, earning a nomination for best folk-rock song at the Los Angeles Independent Music Awards and another for Best American Act at the Toronto Independent Music Awards. They’ve performed and headlined everywhere from NYC’s Living Room to SXSW in Austin. All this touring, combined with a substantial fan base including thousands of followers on Twitter, has made it known that Smile Smile enthusiasts seem to be everywhere.

The “Marry A Stranger” video begins at a wedding altar, shedding light on the fact that two lovers are marrying the wrong people. We watch in suspense as both leave their current engagements alone at the altar, disappointing family members and friends as they run to one another’s arms. “Marry A Stranger” includes personal lyrics such as “it seems so much safer / than going through the whole damn thing again.” The sultry guitar riffs and extraordinary piano notes echo a sound resembling Fountains of Wayne, giving this Smile Smile song an eclectic, yet classy feel. This account of love captures the idea of how honest true love is, and when it is real there is no denying it. Click HERE for the full bio!