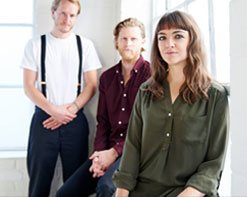 Here at HIP Video Promo, we have watched many of our clients rise to stardom. Most of the charting artists we have promoted began as usual creatives trying to get a few video views, now they sell out arenas and dominate airplay. We envision this prominence for many of the smaller artists we service currently; it’s only a matter of time till they surpass the heights they were reaching. We act like proud parents watching our kids grow up and succeed in the adult world. It’s great to watch our spotlight artists evolve and listen to the newest projects they release.

The Lumineers are one of the most beloved indie-folk bands in the world. We are familiar with their soft lyrics and infectious singalongs since working with them most recently in 2016. Their newest release, “Classy Girls (B Version),” revitalized “Classy Girls” from their debut 2013 album, The Lumineers. Although the music video was released earlier this April, it was filmed in 2010 in a house in Ramsey, NJ, where the band recorded a countless amount of ideas together. The Lumineers are now as active as ever; they recently played in a streaming music festival titled “Live From Quarantine” to help raise money for frontline medical workers to get the critical protective gear they need.

When we worked with Paramore in 2006, it was clear they would take over the alt-rock world. While they have not released music as a band since 2018, lead singer Hayley Williams is active in her solo projects. Her recent premiere, “Simmer,” from the forthcoming album Petals For Armor, is a heartbreaking excerpt about her ex-husband. Admiringly, Williams was able to channel that heartache into a curated self-love sanctuary at Bonnaroo Music Festival.

Two of our past clients, NGHTMRE and Tory Lanez linked on the February Release, “Wrist.” The bass DJ and rapper created an explosive hip-hop electronic track and music video that flexes a lot of icy jewelry and NGHTMRE’s orchestration skills in an enchanting kingdom. They spend their quarantine active online; NGHTMRE played a set on the streaming festival, Couch Lands, while Tory Lanez hopes to rage with fans soon in celebration of his newest album, The New Toronto 3.

Quarantine has many “bored in the house and in the house bored,” but Rich Brian certainly knows how to utilize his time. We promoted his first hit “Dat $tick” in 2017, and his witty humor still shines in his quarantine videos: silly Instagram posts of him messing around in PJs to the music he creates out of boredom. Luckily, Rich Brian brought us his first single of the year “Bali (with Guapdad 4000)”. The impressive Indonesian 20-year-old can’t even legally drink yet but secured a spot on the canceled Coachella lineup and is also championed on the 2018 Forbes Asia 30 Under 30.

It brings us so much pride when we see the fantastic musical maturity, new projects, and community philanthropy our past clients have done. Soon enough, we will write another one of these blog posts, and it’ll highlight many of our smaller up-and-coming artists now.