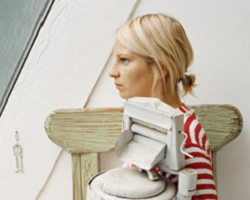 Before she was internationally known as one of the world’s most exciting, creative pop stars, Sia was the singer for the acid jazz band Crisp in Adelaide, Australia. After Crisp disbanded in 1997, she released her first solo album OnlySee in 1997 and moved to London. In 2007, after two more albums (Healing Is Difficult and Colour the Small One, both of which weren’t released stateside till 2006), she released the “mini-album” Lady Croissant in 2007 on Astralwerks. In addition to several live recordings, Lady Croissant also included one new track: “Pictures.”

We had the honor of promoting Sia’s video for “Pictures” in the spring of 2007. Here, Sia plays the object of our male protagonist’s affection. They’ve broken up, but he’s still hung up on her, quite literally: he just can’t bring himself to take her portrait down from the wall. Taking place on the streets of the suburban parts of Los Angeles, “Pictures” show’s Sia’s potential as an all-American pop singer. There’s no doubt that this Aussie native was bound to crossover to stateside success!

Sia kept up this momentum with Some People Have Real Problems in 2008, We Are Born in 2010, and a greatest hits album Best Of… in 2012. In 2014, seven years after we promoted “Pictures”, Sia’s album 1000 Forms of Fear debuted at Number 1 in the US.  Though it’s mostly an electropop album, 1000 Forms of Fear also pulled elements of reggae and hip-hop, with lyrics focusing on her experience with drug addiction, bipolar disorder, and social anxiety.  The lead single “Chandelier” became a top ten hit in the US and hit number two in Australia, as well as charting in the top 5 in 20 countries worldwide and being named to several year-end lists from the likes of Consequence of Sound, Spin, and Rolling Stone. “Chandelier” was the first of a three Sia videos to feature Maddie Ziegler (of Dance Moms fame) dancing as Sia, and won the MTV VMA for Best Choreography.

Sia has also written and/or performed songs on several feature film soundtracks, including The Twilight Saga: Eclipse, Pitch Perfect 2, the Fifty Shades of Grey trilogy, and Wonder Woman. She moved from RCA to Atlantic Records in 2017 and released the Everyday is Christmas album that year, followed by an EP and album with LSD, her collaboration with Diplo and English musician Labrinth, in 2019.

In February of this year, Sia was featured on “ON”, a track by K-pop superstars BTS on their album MAP OF THE SOUL: 7. Check it out below!

Sia isn’t just an incredible artist, she also loves to give back: a longtime vegan, she’s participated in activism for PETA and even was a narrator for the animal rights documentary Dominion. Her video for “The Greatest” in 2016 not only featured stellar choreography, as her fans have come to expect, it paid tribute to the 49 lives lost in the Pulse Orlando shooting.