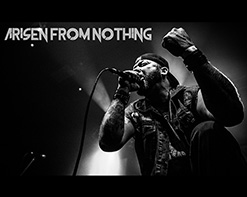 Seattle’s masters of destruction, Arisen From Nothing are back with their lethal brand of metal infused with a shot-of-adrenaline groove in a sonic rage that is sure to catch your attention… But this time, it’s LIVE! As if the battle cries of “Chaos” weren’t enough, these headbanging heathens are asserting their dominance in the new live music video for “Better Off Dead.”

The five-piece musical tsunami is made up of fearless frontman, Jessie Brigham, six-string shredders, Troy Elmore and Steven Pontius on guitars, Eric Hanson on bass and Brandon Fuller, a former member of national touring act, Ghost Town Rebellion on drums. With the help of Montreal-based record label, Collective Wave Records, they released their hard-hitting album Broken in fall of 2017. The record’s massive production flaunts walls of guitars, never-ending bass grooves and of course, Bringham’s signature screams soaring over the mix. But the band’s talents aren’t confined to the studio.

Offering a glimpse into the Arisen From Nothing experience, the live video for “Better Off Dead” showcases the band in their natural habitat. A staple of a quality rock band is a killer live show, and with screaming fans and a commanding stage presence, AFN have shown their quality. The footage is draped in black and white keeping the aesthetic of the band clearly noted. Making the personal connection with fans can be hard nowadays with screens between us, but fans have grown near and dear to AFN, and the realness of this live video has cemented the kind of sacred band-to-fan bond that lasts forever.

Here at HIP, it’s a true honor and profound privilege to tell the Arisen From Nothing story and we’re stoked to share this incendiary live clip with you and your viewers. Please don’t be shy about getting in touch to let us know what we can do on our end to get this video into your programming and rest assured we’ll have plenty of outstanding AFN merch to set up online/on-air contests and giveaways throughout the campaign. Please contact Andy Gesner and the HIP Video Promo team at (732)-613-1779, email us at info@HIPVideoPromo.com.

For info about other Arisen From Nothing music videos, click HERE.