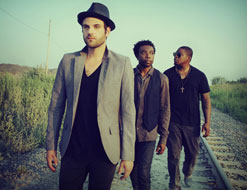 Hello programming brethren, it’s Andy Gesner and the HIP Video promo staff with a radiant new follow up clip from Canadian indie rock aristocrats Bedouin Soundclash. The band returns with another excellent entry from their celebrated record Light The Horizon titled “Elongo.” The track marks the group’s return to the spotlight with one of their strongest releases, accompanied by a gorgeously shot video from start to finish.

Light The Horizon, produced by King Britt (Mos Def remix, King Sunny Ade), acts as the follow up to Street Gospels, which has received a “Pop Album of the Year” Juno Awards nomination along with a Juno “Video of the Year” nomination for “Walls Fall Down.” Bedouin Soundclash has also received a Juno Award in 2004 for “Best New Band.” The band is no stranger to theMuchMusic video countdown show MuchMoreMusic either, attaining the ultra-coveted number one spot. The indie rockers have already built a massive worldwide following, getting to share the stage with superstars Coldplay, Alicia Keys, and The Verve in Japan. The band recently opened on the No Doubt reunion arena tour alongside Paramore, as well as touring worldwide including a tour in India! The group is now busy rocking the UK before returning to our lovely continent.

We are thrilled to be part of this fantastic Bedouin Soundclash single. We are certain you will love “Elongo” from the very first several seconds. The folks over at Nat Geo Music have provided us with lots of copies of Light The Horizon for your listening pleasure and on-air giveaway needs. If you need more info, call Andy Gesner at 732 613 1779 or e-mail us at info@HIPVideoPromo.com. You can also visit  www.BedouinSoundclash.com to find out more about Bedouin Soundclash.