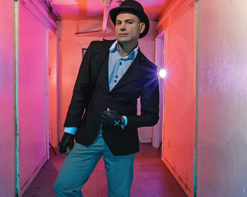 With the video for “Apologies Wasted,” viewers were introduced to Xavier Toscano, an artist whose music and videos are a constant reminder that pop music is music that makes us feel good! His belief that pop music is the soundtrack to our lives is what inspires his constant pursuit of crafting the perfect tune. Songs that would not only fit in on the Top 40 charts, but also ones that stick for years, bringing about a rush of memories just from a few beats, or a sliver of the melody.

His newest single “Runaway” finds the balance between contemporary and timeless. From a production perspective, Xavier delivers a song that throbs, bounces, and weaves as well as anything on the airwaves. At its core, it is a song that is built on a foundation of mesmerizing beats and rhythms while spreading an enticing melody over the top.

It’s not just in the studio that Xavier Toscano exhibits this kind of passion. He’s quickly becoming known in the Bay Area as an artist whose live show delivers an energy that can only come from a performer who wholeheartedly believes in every word, every hit, and every note. One challenge when making music videos is to find a way to capture the natural energy of an artist and translate it to the camera. In the Benjamin Jones-directed video for “Runaway,” Xavier carries the pop music torch and brings down the house with an electrifying performance.

“Runaway” is a good bet to run away with the hearts and minds of viewers! A wild array of visuals combining live action and enhanced CGI footage takes Xavier from one man to a full compliment of pop star presence. Each verses features the camera on the inside of a square, each panel simultaneously featuring Xavier in his element, performing for an eager audience on the other side of the camera. Much like the energy of the song cannot be contained, Xavier explodes outside of the box for each chorus. The panels give way to a single Xavier dissolving into a blue and purple gradient like a cloud of stardust. The energy of this track is a bona fide banger that will connect with eyes and ears across the spectrum!

It’s our distinct pleasure to have the opportunity to work with Xavier Toscano once again. We are here to get you whatever you may need to get this video into your programming. Please contact Andy Gesner and the HIP Video Promo team at (732)-613-1779 or email us at info@HIPVideoPromo.com. You can also visit www.XavierToscano.com for more info on Xavier Toscano.

For info about other Xavier Toscano music videos, click HERE