Anti-Flag “This Is The New Sound” 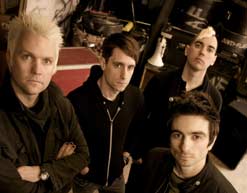 Andy Gesner and the HIP Video Promo crew coming at you with another round of energizing punk rock to kick your day into gear. We always know that with Anti-Flag we are going to get high energy songs that are leading the charge on challenging conventional wisdom and fighting for the oppressed and overlooked members of our society. It’s their strong conviction for social equality that has made them huge favorites with blue collar punk fans across the globe, and undeniably one of the stars of the SideOneDummy roster. Their newest album, The General Strike, might be their most aggressive album to date and shows that even after a distinguished 20 year career, they’re still as clairvoyant and resolute in their mission as ever.

The band recently partnered with Amnesty International to premiere their new video for “This Is The New Sound” to help use their music and influence to raise awareness about the National Defense Authorization Act, which many are convinced is an extension of the erosion of human rights seen under the Bush administration and furthered by the unfulfilled promises of Obama administration. It’s a solid match, as Amnesty International’s huge reach can help spread the band’s sound to a broad international audience and Anti-Flag is the perfect band to create a voice for many that often do not have a voice that would otherwise be heard.

In their new video for “This Is The New Sound” the boys deliver a serious subject in an easily digestible package. Some may think that they are making light of their stance, but in reality the delivery is necessary because the real versions are not fit for TV. The video begins with frontman Justin Sane going about his business at a local coffee shop, enjoying a cup of joe and reading the local newspaper. Only steps away from the coffee house an ominous presence is felt as a mysterious van appears in the background and before we can bat an eye he is kidnapped and thrown in the back of the van, where the other members of Anti-Flag are being held captive.

They are taken to an undisclosed location (which is actually the Ohio State Reformatory of Shawshank Redemption fame) where their captors are revealed to be an evil clan of puppets have taken the band hostage and subject to various forms of inhumane torture such as electroshock and waterboarding. These are serious forms of “interrogation” and yet we never see any charges or reasons brought against the band, which is precisely the heart of the issue with the National Defense Authorization Act, that all Americans will be subject to baseless and illegal imprisonment. But fear not, Anti-Flag has never been one to take abuse of power lightly, and you can be sure that even after being dragged through the ringer, they still have a little bit of fight left in them.

We’re very proud to get behind this clip and it is always a pleasure to work with the fine folks at SideOneDummy. We’re loaded up with copies of The General Strike for you and your viewers, so please don’t hesitate to be in touch. If you’d like more info contact Andy Gesner and the HIP Video Promo crew at (732)-613-1779 or email us at info@HIPVideoPromo.com. You can also visit www.SideOneDummy.com or www.Anti-Flag.com for more info on Anti-Flag.

For info about Anti-Flag’s previous video, “The Economy Is Suffering (Let It Die)” click HERE

For info about Anti-Flag’s video, “When The Lights Go Out” click HERE