Architecture In Helsinki “That Beep” 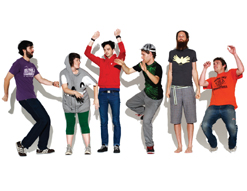 Greetings indie rock fans, it’s your pal Andy Gesner and the staff from HIP Video Promo! Here at HIP, we love getting business from repeat clients. That said, there are few times when we’re happier than when we have a new Architecture In Helsinki video to promote. We know from past performance that any clip from the AIH camp is going to be inspired, creative, wildly energetic, strange, wonderful, and utterly unique. Since the release of Places Like This, it’s been our pleasure and privilege to share Architecture In Helsinki’s videos with you, so we know you’ll agree when we say with authority that they’re awesome. And we mean that in the traditional sense: we’re in awe of what they do. Just as surely as the Melbourne quintet will be remembered for their irresistible (and danceable) experimental pop songs, they’ll also go down in history as one of music video’s most audacious bands.

Who could forget their impersonation of a native tribe, complete with puppet-bodies that miniaturized the musicians, in the hilarious clip for “Heart It Races”? How about the backstage pyrotechnic travelogue and mock documentary in the “Debbie” video? Better still was the spot that accompanied the exuberant “Hold Music” – each band member on a separate trampoline, executing impossibly well-choreographed moves in midair. And imagine our astonishment when we discovered that the follow-up clip for “Like It Or Not”, was, if anything, even more compulsively watchable: the story of two anthropomorphic coconuts, stitched in needlepoint and lovingly animated.

So when we tell you that the clip for “That Beep” is their best – and farthest-out – yet, we know you know that’s saying something. Directed by Melbourne production company Krozm, it’s a vivid, kinetic hallucination, and one utterly unlike anything else on music television. As always, the band uses simple props and sets to make a positively unearthly statement. In this case, the breakthrough to the “other side” is literal: the members of Architecture In Helsinki are dragged, blindfolded, through a door and into a brightly-painted, geometric world.

A song like “That Beep” demands a colorful clip. It’s an extension of the left-field synth-funk sound the band perfected onPlaces Like This – in fact, it’s probably the most danceable thing they’ve ever recorded. Again, the group has managed to make a peculiar sonic phenomenon – in this case, low-voiced beeping – into an uncanny and irresistible pop hook. “That Beep” is the first Architecture In Helsinki single to be sung in its entirety by Kelly Sutherland, and she makes the most of the opportunity: her performance is beguiling, sexy, playful, and altogether winning. And as for the beats, what can be said?, if you’ve got any taste at all for synth-pop, electro-funk, or new wave, you’re going to move to this single.

Sutherland is the star of the “That Beep” video, but she’s far from the only focus. Krozm films dancers in full blue body-paint, leaping and twisting in front of gold backgrounds. They’re the residents of the land behind the smoking door, and it’s sometimes tough to tell if they’re friend or foe. One at a time, they lay objects at Sutherland’s feet: she’s treated like a queen, while her bandmates are bound to the wall. Until they drink smoking blue potions; then, they themselves are transformed into hooded blue initiates! Architecture In Helsinki and Krozm get immense mileage out of simple theatrical gestures: solid yellow props against blue background, hammers and flyswatters, golden spheres. The choreography is gymnastic and oddly tribal; movements are sudden, dramatic, invested with meaning. Every shot is carefully structured, every gesture counts, and every second stimulates.

Polyvinyl delivers as always, and we can’t be more thrilled to be working with Seth Hubbard and the rest of the team to bring you yet another amazing Architecture In Helsinki video! If you need more info, call Andy Gesner at 732-613-1779 or e-mail us at info@HIPVideoPromo.com. You can also visit www.PolyvinylRecords.com to find out more about Architecture In Helsinki.