The Blind Boys Of Alabama “Spirit In The Sky” 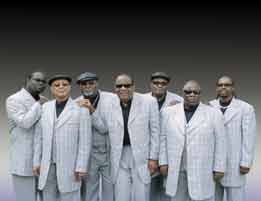 Greetings to all of my music programming pals! It’s Andy Gesner and the staff at HIP Video Promo here with yet another summertime gem for you. This time it’s The Blind Boys of Alabama’s touching, visually stunning tribute to one of their recently fallen comrades, original member George Scott, with their cover of the Norman Greenbaum classic “Spirit in the Sky.” How many groups that were hot in the 1940’s are still creating new, relevant material in 2005? ONE! Recent albums have paired the gospel stalwarts with a variety of well-known admirers including the 2004 Grammy-winning CD with Ben Harper and 2003’s Grammy-winning collection of Christmas duets, Go Tell It on The Mountain, with an amazing cross-section of talents including Chrissie Hynde, Tom Waits, Aaron Neville, Michael Franti and George Clinton.

Atom Bomb, their new release, is at once traditionally grounded and also a remarkable fusion experiment. The Blind Boys perform songs by Eric Clapton (“Presence of the Lord”) as well as Fatboy Slim and Macy Gray (“Demons”). On “Demons”, rapper Gift Of Gab, from the socially progressive Blackalicious, serves as a guest emcee. But as always, it’s the veterans who dominate the set, and who successfully dedicate the contemporary sounds to their higher purpose.

The first single, “Spirit In The Sky”, is indeed a spiritually rocking version of Norman Greenbaums 1970 classic. In addition to the Blind Boys amazing vocals, “Spirit” also features the blazing guitar work of Los Lobos’ David Hidalgo accompanied by the hard-driving harmonica blasts of the legendary bluesman Charlie Musselwhite. The video opens and closes with black-and-white shots of the singers from the Fifties, testifying before audiences, and declaiming into antique microphones. But the bulk of the clip takes place in a heavenly white room. Dressed in red blazers, The Blind Boys Of Alabama stand in an arrowhead formation, and as they sing, sway to the rhythm, and clap their hands, rays of pure white light stream around their faces and between their outstretched limbs.

What makes this video particularly poignant is that one of the original founding members, George Scott, passed away this year, at the age of 75, just after the recording sessions that became Atom Bomb were wrapped. This video (and this version of “Spirit In The Sky”) stands as a fitting farewell to the man and the musician. Though Scott will be greatly missed, The Blind Boys of Alabama will continue to tour and spread their soulful message to new and old fans across the country. Raub Shapiro of Bad Company Films, who directed “Spirit in the Sky”, has previously directed for the bands Primus and enormous, and has produced over fifty music videos for artists like Beck, Green Day and John Lee Hooker. Bad Company Films also produces commercials and documentary projects, and has offices in San Francisco and Los Angeles.

Everyone at HIP is proud and extremely exited to be working with Real World Records (and their U.S. licensee, Narada) again to bring you this excellent tribute. We were on board to help promote their last two videos for “Higher Ground” and “Last Month of the Year” and have become fully aware of how these extraordinary artists are revered by so many of you. They will be on tour throughout the month of August performing a number of shows with blues guitarist and singer/songwriter Susan Tedeschi, and if you would like to see these legendary performers when they visit your market, please get in touch and we can hook it up! Here at HIP we have plenty of copies of their terrific new Atom Bomb CD for on-air giveaways. If you need more info call Andy Gesner at 732-613-1779, or email info@HIPVideoPromo.com. You can also visit www.RealWorldRecords.com orwww.BlindBoys.com to find out more about The Blind Boys Of Alabama.