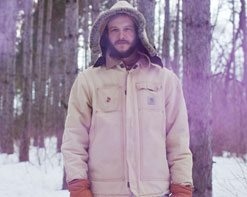 Nine months ago when we brought you the first Bon Iver video for “Calgary”, we said that the new album, Bon Iver, was one of the most anticipated albums of the summer. Fast forward to February of 2012 and you may have seen Bon Iver standing onstage at the Grammy’s, accepting the award for Best New Artist and Best Alternative Music Album (not to mention nominations for Song Of The Year and Record Of The Year for the second single “Holocene”). Now, we certainly wouldn’t consider Bon Iver to be a new artist, we’ve been following him since the release of For Emma, Forever Ago in 2008, but we were thrilled nonetheless to see a member of the HIP family so widely recognized for his efforts.

Much was made of Justin Vernon’s opinions about awards ceremony and the misplaced efforts in honoring artists, but more importantly what was not lost in the shuffle was the fact that Bon Iver truly was one of the great albums of 2011. Both the videos for “Calgary” and “Holocene” that you received from us were grandiose clips that matched the ambitious production. Whether it was the haunting dreamlike sequence throughout “Calgary” or the Icelandic fantasy of a young boy wandering in the natural beauty of the world, this is an artist whose visual presentation is as well-crafted as his music.

We are now thrilled to present you the third video from the album, “Towers”. Teaming up once again with “Holocene” director NABIL, we are treated to a clip of stunning natural beauty and a solitary figure seemingly alone in the world. This time the young boy has been replaced by a weathered old man, complete with flannel shirt, long hair and beard, and galoshes, who lives amongst the forests of the Pacific Northwest (it was actually shot mostly on Indian-preserved land). Throughout his house are drawings and small models of towers, one of which he loads into his vintage Ford pickup along with some fishing nets and heads to the coast. The docile nature of the video is only broken when we begin to see more massive versions of said towers far out in the ocean. We soon understand the task at hand, to reach these enormous structures in nothing more than a small rowboat. What these towers represent is intentionally vague according to director NABIL; “When Justin sent me a breakdown of what certain parts/lines of the song meant to him I did my best to decode it and curate into something simple, and hopefully the viewer can take from it their own feeling of what the towers represent”. The ocean can be unforgiving and in a very Old Man And The Sea kind of way, the struggle between man and nature unfolds in a very human way in front of our very eyes.

We’re are very appreciative of the folks at Jagjaguwar for bringing us on board once again to be a part of the Bon Iver team. In case you need any enticing, we’ve still got a few copies of the Grammy Award winning Bon Iver for you and your viewers, so please be in touch to get your hands on some! A lucky few of you will also see Bon Iver coming to your town this Spring, drop us a line for tickets to check out the live show! For more info contact Andy Gesner at (732)-613-1779 or email at info@HIPVideoPromo.com . You can also visit www.Jagjaguwar.com or www.BonIver.org for more info on Bon Iver.