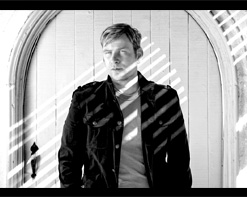 Brian Mackey knows: there are few things in life as brutal as a breakup. Once we’ve become accustomed to the support of a partner, we can find it nearly impossible to stand alone; it’s no great exaggeration to say that we’re forced to learn to walk again. But emotional turbulence has often prompted gripping, forthright art, and Mackey’s latest single is just that kind of a song. “Learn To Be” is an aching, unflinching look at dependence within a troubled relationship – the lament of a man who is searching for a lost sense of self in the long shadow of his partner. It’s exactly the sort of writing we’ve come to expect from Mackey, an earnest chronicler of the human heart whose private reflections always have universal dimensions.

To translate the story of “Learn To Be” to moving images, he’s turned to the Argentine filmmaker and artist Caro Patlis, who brings his song to life in bold color. Patlis has won international recognition as a director, but she’s also a trained photographer, too – one who has worked for the legendary Danny Clinch – and her attention to composition and visual detail is apparent in every frame of the “Learn To Be” clip. Here her camera follows a young painter whose latitude for expression is compromised by his obsessive dependence on the women in his life. Just as their protagonist flings paint at his canvas in frustration, Patlis and Mackey confront the viewer with scenes that are provocative, colorful, maybe a little messy, but always compulsively watchable.

“Learn To Be” is the lead single from Brian Mackey’s upcoming EP – one that’s poised to extend a winning streak that began a decade ago with the imaginative, playful Feng Shui For Slobs EP. That disc earned Mackey his first placement (the song “Painted Red,” which was featured in the Disney Channel’s Naturally Sadie), and the singer-songwriter hasn’t looked back since. With its cinematic scope and its immersive beauty, Mackey’s music is a natural fit for television and movies, and his songs have scored programming on the Travel Channel, A&E, Lifetime, and numerous other filmed projects. Broken Heartstrings, Mackey’s 2014 set, earned him attention on CMT for the expansive “America”. He’s persuaded ace producer Jon Levine – the man who put the muscle in Rachel Platten’s “Fight Song” — to man the boards for his set. He’s on the brink of a major breakthrough, and we won’t be surprised at all if “Learn To Be” is the single that makes the telegenic Mackey a star.

Brian just kicked off his Summer US tour at the City Winery in NYC, supporting the legendary David Bromberg. In October and November he heads off to a 10-city European tour with artist Ron Pope, so please don’t hesitate to get in touch and let us know what we can do to get it into your programming. Please contact Andy Gesner and the HIP Video Promo team at (732)-613-1779 or email us at info@HIPVideoPromo.com or visit www.BrianMackeyMusic.com for more info on Brian Mackey.

For info about other Brian Mackey music videos, click HERE