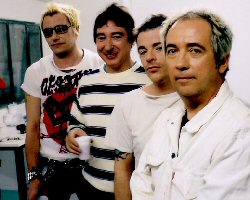 Hello everyone! It’s Andy Gesner and the staff from HIP Video Promo. What can we say about the Buzzcocks that hasn’t already been said? As one of a handful of true original (’75-’79) punk bands, the Buzzcocks have influenced nearly everybody making music with guitars. Pete Shelley’s pithy lyrics and poison-quill vocals and Steve Diggle’s blunt, brutal guitar have been imitated by countless musicians; it’s arguable that neither Green Day nor Nirvana would have been possible without the example of the Buzzcocks. Books, articles and academic treatises have been written about the cultural significance of band, and their sway over their contemporaries can never be disputed. Walk into any hipster bar from Brooklyn to Brixton, and you’re likely to hear their classic songs played alongside those of modern rock favorites. There’s no dissonance – because those modern rock bands are using a sonic vocabulary developed by the Buzzcocks in the late seventies.

The original iteration of the Buzzcocks disbanded in 1981, but the principals never stopped making music: Steve Diggle formed the underrated Flag Of Convenience, and Pete Shelley released a series of critically-acclaimed solo albums. Shelley’s love for depressive Krautrock, minimalism and repetition, and icy synthetic textures – apparent on the Buzzcocks’ full-length albums, if not always on the world-famous singles – came to the fore in his solo work. When he reconstituted the band in the early Nineties the fruits of those explorations were apparent to long-time fans: the reimagined Buzzcocks sounded bigger, tighter, bleaker, more insidious, and if possible, even more urgent.

Flat-Pack Philosophy is the quartet’s most immediate collection of songs since the Seventies.  But although the sound and performances are unmistakably Buzzcocks, the singers sound more ambivalent, more rueful, and perhaps even more adult. Here, the band that toured with the Sex Pistols – and have outlasted the rest of the class of 1977 – show why surviving, beating the odds, and remaining relevant is more truly punk than flaming out.  Make no mistake, though, romantic disillusionment and relationship instability is still the fuel that this engine runs on – and “Wish I Never Loved You”, the lead single, is as scalding as anything on Singles Going Steady. Shelley’s voice drips with vitriol as he intones his scalding rhymes, and the new rhythm section matches the sentiment with a groove that is propulsive, supple, and loaded with attitude.

Paul Madden’s excellent clip for “Wish I Never Loved You” looks like punk: it’s choppy, grainy in places, abrasive, aggressive, and confrontationally sexy. The band is shot in their element – under the stage gels, and before a cheering audience. But the images are streaked and the forms of the bandmembers seem to dissolve in the electric light, as still images of swinging drumsticks and airborne guitars flash by like a flipbook. We barely catch the faces of the musicians, but it’s almost unnecessary: their conviction is apparent. Elsewhere, the director intersperses footage of words on a pager, hockey players and dancing girls, cartoon signs that smack vaguely of fallout shelter instructions, and wet lips mouthing the words of the chorus. The clash of bodychecking blurs into the gyration of the dancers and the crowding of words piled upon words, and, ultimately, with the Buzzcocks themselves, spitting their disappointment and revulsion into their microphones.  Four decades into their career, they’re as defiant and challenging as ever.

We are very excited to be working with Cooking Vinyl to bring you this clip from this legendary punk band! We have plenty of copies of Flat-Pack Philosophy for on-air giveaways, so please feel free to get in touch. If you need more info, call Andy Gesner at 732-613-1779 or e-mail us at info@HIPVideoPromo.com. You can also visit www.HIPVideoPromo.com,www.CookingVinyl.com, or www.Buzzcocks.com to find out more about Buzzcocks.