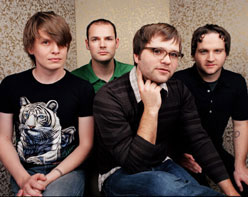 Salutations to all of my friends in the music video community! It’s Andy Gesner and the staff at HIP Video Promo, coming to you from a still-summer-hot New Jersey. It’s been our immense privilege to have worked with DCFC and Ben Gibbard on promotional campaigns for videos from both Transatlanticism and The Postal Service’s debut Give Up. Which is why, when Plans entered the Billboard Charts last week at #4 after moving 90,000 copies in seven days, we weren’t surprised at all. We saw it as the culmination of years of releasing great albums, touring the country, and emotionally connecting with audiences. Death Cab’s rise from the small town of Bellingham, Washington to the rock stratosphere had felt inevitable: you can’t keep music this direct, this catchy, this meaningful, and this irresistible off of the airwaves.

It also helps to have energetic friends. After years of building their name on Seattle indie Barsuk Records, Death Cab has made the leap to the majors. But Atlantic Records hasn’t messed with success. Everything that made Transatlanticism a runaway masterpiece is back on Plans: Gibbard’s frank, passionate lyrics and instantly winning vocal performances, Chris Walla’s misty, radiant production, Nick Harmer’s precise, masterfully-structured bass lines, Jason McGerr’s adventurous and propulsive drumming. The songwriting, too, has never been better: if prior albums found Gibbard pondering his own dislocation and raging against emotional injustice, on Plans, he’s exploring new and subtle dimensions of his characters’ insecurities. His writing has achieved a stunning maturity and perspective.

“Soul Meets Body” seems destined to become this Autumn’s anthem: a song with a melody and release sweeping enough to suggest the turn of the seasons and the universal yearning for rebirth. Always close to the metaphors they mobilize, Death Cab For Cutie literalizes this idea in the beautifully-shot video for “Soul Meets Body”. As Gibbard walks through the forest, singing, small colored spheres struggle upward from the earth. At first, we assume that these are plants flowering – but a few moments later, we realize they aren’t. They’re musical notes which take flight like a flock of birds, soaring above the fields and forests, and the small cottage in the woods where Death Cab For Cutie plays their song. The floating notes become a physical manifestation of the band’s aspiration for their music – will they reach a listener, or will they be intercepted along the way? Some don’t make it, and sadly, we watch them trodden in the dirt, or hanging lonely on high telephone wires. But the clip closes with a hopeful image: a good representative sampling of notes drifting over the ocean, borne by the wind across the sea.

For those of you keeping count, the “Soul Meets Body” promotion marks the first time in our five year HIP journey where we have had the opportunity to work four separate clips from one artist, and we couldn’t be more proud to share this milestone with none other than the amazing Diane van Horn and her staff at Atlantic Records. Death Cab will be on tour this Fall supporting their brilliant major label debut Plans, of which we will have limited copies to satisfy all of your DCFC cravings. If you need more info, call Andy Gesner at 732-613-1779 or e-mail us at info@HIPVideoPromo.com. You can also visitwww.AtlanticRecords.com or www.DeathCabforCutie.com to find out more about this amazing buzz band.

For info about “The Sound of Settling”, click HERE