Downtown Singapore “What She Said” 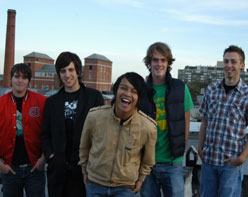 A heartfelt hello to all my cherished video programming cohorts! It’s Andy Gesner and the staff from HIP Video Promo with another tremendous video sure to please you and your viewers. Here at HIP, we consider our repeat clients our most important asset, and we’re thrilled to be working once again with DCide Records and Downtown Singapore. When we last sent you a clip from this dynamic new band from Maryland, the quintet was riding high on the underground success of their debut, Understanding A Guarantee. Despite its brevity, the EP elbowed its way into the CMJ Top 100 on the strength of its scalding single “Velvet Divorce”. . With a sound halfway between that of vintage DC hardcore and radio-friendly emo-pop a la Jimmy Eat World, Downtown Singapore seemed to promise a synthesis of classic punk and contemporary rock music.

Don’t Let Your Guard Down has delivered that – and much more. Producer Matt Squire (Panic! At The Disco, The Receiving End Of Sirens) has honed and focused the group’s sound, broadened and variegated the band’s arrangements, and pushed the young writers to explore new dimensions in their already compelling songwriting. Squire has retained all the fury of singer Jerry Scott’s approach onUnderstanding A Guarantee, but has coaxed nuance and even wry humor out of his delivery. Drummer Matt Thorsen and bassist Josh Louge slam with the same urgency on Don’t Let Your Guard Down, but here, they’re locked in, playing with newfound poise, confidence and precision. And the twin guitar attack of Jake Rabadi and Matt Van Gasbeck, once simply exciting in its straightforward ferocity, is now multifaceted and positively lacerating. Best of all, the band has found its storytelling voice, spinning out tales of ambivalent youth with the assurance of longtime participants in the punk subculture.

Sure to be burning up iPods throughout 2006, “What She Said”, the lead single from the full-length, is a showcase for V 2.0 of Downtown Singapore. Over a rock-solid beat and deft guitar interplay, Jake Scott howls out a narrative of romantic disillusionment; his disappointment is evident, but there’s an edge of caustic disdain in his voice, and a knowing twinkle in his eye. It’s a polished piece, on par with the best work of the bands Downtown Singapore shared stages with on their recent American tour: Hidden In Plain View, Hellogoodbye, He Is Legend, All-American Rejects.

Downtown Singapore reunites with video director Tyler Lambert for the “What She Said” clip – and it is immediately evident that Lambert, too, has raised his game and discovered a nascent storytelling talent. The shots of the band rocking hip Washington, D.C. club DC9, are entertaining – and it’s great to see the band so attentive to each other. The excitement of watching the five members of Downtown Singapore come into their own voices and talents is infectious. But Lambert has interwoven the story of a confused young couple with the live footage, and it’s this narrative that really captures the viewer’s attention.

Polaroids of the couple drop on to a hardwood surface – each is intimate, open, and loving. But as the clip begins, all isn’t well – the young man wants to go out to the Downtown Singapore show, and the woman, face down in bed, is reluctant. At the club, the boyfriend sees a near-doppleganger of his girl, tattooed and trashily-dressed, flirting shamelessly with a spectator. The following night, after a fight in the car, the couple arrives at the show together; there, the girlfriend is chased into the bathroom by her double. The confrontation between the two versions of the young woman, one spectral and one all-too-real, plays out as the song reaches its climax.

It is our pleasure to be working with all the great folks at DCide to bring you another terrific clip. Though the new CD is not slated to hit the streets until February 21st, we will have plenty of copies of Don’t Let Your Guard Down for on-air giveaways. Downtown Singapore is currently on a lengthy nationwide tour, so if you would like to set up an interview or secure video IDs, please don’t hesitate to contact us. If you need more info, call Andy Gesner at 732-613-1779 or e-mail us at info@HIPVideoPromo.com.