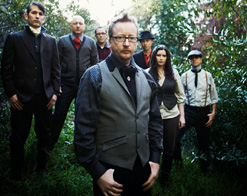 Hello friends, it’s Andy Gesner and the HIP staff once again. We at HIP Video Promo are proud to be part of Flogging Molly’s effort to raise consciousness about an all-too-common social problem — and to rock their devoted audience in the process. The heralded Gaelic-punk combo has appended a moving public service announcement to their latest video clip. In it, Flogging Molly frontman and songwriter Dave King appears with his father-in-law (and dad of FM fiddler Bridget Regan!) to discuss the impact of post-traumatic stress disorder among returning soldiers. Mike Regan — a Vietnam veteran and decorated Marine — speaks with authority about the prevalence and emotional cost of PTSD, and King reminds the viewers that a new wave of returning American soldiers is currently cresting. Timely and thought-provoking, the Flogging Molly clip further underscores the awareness and compassion of a band without borders.

The PSA is made even more powerful by the band’s performance on the explosive “Punch Drunk Grinning Soul”, a standout cut from the much-loved Float album. It’s a song of defiance in the face of depression and loss, and Dave King sings it with the fire of a street preacher. Veteran video directors Artificial Army have paired the song with a clip that addresses post-traumatic stress syndrome metaphorically — but powerfully. We’re introduced to a rabbit, bruised and scarred from some off-screen battle, and warily returning home to his warren. (This isn’t any fluffy bunny, either, but a rodent-warrior whose fatigue and resolve is immediately identifiable.) Much as PTSD sufferers do, the rabbit flashes back to scenes of battle: feral rats and wild-eyed wolves in the wood. And by no means does his war stop on the home-front. He’s challenged for his place in the warren by larger rabbits — who underestimate his strength — and needs to fight again to win his place in the forest.

While the rabbit struggles underground, Flogging Molly play under the canopy of trees in a grove. As always, they play with the passion that has made them famous on at least two continents. Float’s #4 debut on the Billboard charts — a remarkable achievement for an independent band — is a testament to the relationship forged between Flogging Molly and their audience. It’s a repartee forged through constant touring, and it’s on display in Live At The Greek Theatre, the band’s recently-released live album. We’re including two clips of Flogging Molly in concert on this reel — both filmed by Kevin Custer during the Greek Theatre concert — and we think you’ll agree that they capture a fantastic act at the very peak of its ability. First, they tear through “Requiem For A Dying Song”, the evocative lead single from Float, and they bring the capacity crowd at the Los Angeles amphitheatre to its feet. And with “Seven Deadly Sins”, the Clash tribute from ’04’s Within A Mile Of Home, Dave King and the band turn the venue into one gigantic dance floor. People throw their arms to the sky, run through the aisles, sing along at the top of their lungs: it’s may shatter the Theatre’s customary reserve, but it’s all to be expected at a Flogging Molly show.

It’s our distinct pleasure to be partnering with the folks at SideOneDummy Records to bring you these top notch clips. If you need more info, call Andy Gesner at 732-613-1779 or e-mail us at info@HIPVideoPromo.com. You can also visitwww.SideOneDummy.com or www.FloggingMolly.com to find out more about Flogging Molly.