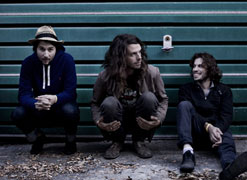 Greetings Programmers! It’s Andy Gesner and the HIP Video Promo crew bringing you another fantastic video from the Sargent House indie folk rock sensation that’s been sweeping the nation, Good Old War. Their new video for “That’s Some Dream” is exactly the right amount of zest for your autumn line up!

Good Old War are the masters of heartfelt organic delivery. The clip for “That’s Some Dream” takes a simple tried and true concept of a music video filmed on the road and flips all the expectations on their head. The camera work is absolutely gorgeous and makes the video feel like scenes out of the movie “Almost Famous.” Although, after a closer look, the irrevocable energy radiating from the band could be just as much of a factor in absorbing the viewer into their world as the cinematography does. It can be tough to explain the beauty of touring to a stationary viewer, but “That’s Some Dream” comes incredibly close to the capturing that irreplaceable and intangible moment of inner freedom that comes from turning something you love into a career. However, this isn’t surprising for these clever cats, who forged their band name from their names: Good from Keith Goodwin, Old from Tim Arnold, and War from Dan Schwartz.

This trio knows the power of an upbeat tune in the major key. With sharpened harmonies, jangly guitars and the unforgettable chorus line, “I’m gonna live, I’m alright / I’m gonna die, I’m alright / I’m okay,” one can’t help but feel the medicine in the words. This sort of magic doesn’t go unnoticed as Rolling Stone has named the band as one of “Bamboozle 2010’s Five Breakout Bands to Watch” and Absolutepunk.net raves that this song “may be the best song that Good Old War have ever penned.” Good Old War’s self-titled sophomore gem is full of shimmering tracks and this is one of the crowning moments on the record that must not be overlooked.

We’re very grateful to the Sargent House team for summoning us to champion Good Old War once again and the band’s fantastic video for “That’s Some Dream” is everything you could want from the genre. If you need more info, call Andy Gesner at 732-613-1779 or e-mail us at info@HIPVideoPromo.com . You can also visit www.GoodOldWar.com and www.SargentHouse.comto find out more about Good Old War.