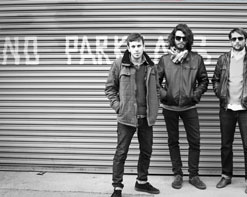 Over the past three years, indie-folk trio Good Old War has captivated countless audiences with their acoustic-driven, sing-along-inspiring live performances. Now, with the release of their third full-length record Come Back as Rain (out March 6th, 2012 on Sargent House), the Philadelphia-based band harnesses the high-spirited simplicity that makes their shows so unforgettable. Like Only Way To Be Alone(Good Old War’s 2008 debut) and their 2010 self-titled sophomore effort, Come Back as Rain showcases the delicately textured melodies and multipart harmonies that have become the band’s signature. Once again revealing their penchant for infectious folk-pop, Good Old War this time sharpens their sound by infusing Come Back as Rain with the same joyful passion they’ve ceaselessly brought to the stage.

Recorded in spring 2011 at Another Recording Company (the Omaha studio owned by Mike Mogis from Bright Eyes), Come Back as Rainfinds the band reuniting with producer Jason Cupp. Despite taking to a far less rustic environment than they did for their last release (an album largely created in a cabin in the Pocono Mountains), Good Old War managed to delve far deeper into the rootsy, organic sound they’ve carefully cultivated since forming from the ashes of Philadelphia indie-rock act Days Away. “When we play live, it’s really natural and energetic and in your face,” says guitarist/vocalist Dan Schwartz, who co-founded Good Old War in 2008 with Keith Goodwin (on vocals, guitar, and keys) and Tim Arnold (on drums, keys, accordion, and vocals). “With the new record we’ve found a way to capture that live feel like never before. So even though this one’s got some heavier material, there’s still something upbeat and joyous there.”

Indeed, a bittersweet spirit instills much of Come Back as Rain, a record whose songs were partly inspired by “that longing for home that happens when you’re away all the time,” according to Goodwin. It’s a rare band that can make a refrain like “I might be present for the end of the world” sound sunny and cheerful (as on the album’s closing track), but Good Old War’s gently uptempo rhythms and high harmonies have an uncanny way of maintaining a bright and buoyant mood without ever coming off as cloying. From the lead-off single “Calling Me Names” (a lovesick kiss-off laced with intricate guitar hooks) to “Better Weather” (a clap-along-worthy paean to embracing optimism against all odds) to “It Hurts Every Time” (a steel-guitar-kissed footstomper about an endlessly disappearing lover), Good Old War seems sweetly devoted to keeping the faith in the face of heartache. One of the most heart-tuggingly hopeful songs on Come Back as Rain, the epic yet ethereal “Amazing Eyes” blends soaring vocals with gracefully strummed guitars and warm piano chords to stunning effect. The new video for “Calling Me Names” was directed by Elliott Sellers, whose four lyric videos for Jason Mraz and Christina Perri have accumulated over 17 million Youtube views.  Filmed over a few hours in Los Angeles, the clip features a classic 1963 Ford Edsel station wagon that was found by a ballsy and budget-conscious Sellers, who knocked on the owner’s front door after seeing it parked on a side street in a dicey part of town.  Total cost: $100 for the day.

From start to finish, Come Back as Rain bears a rousing intensity that will certainly be familiar to anyone who’s witnessed their live show. Thanks to crowd-ruling sets delivered while opening for the likes of Alison Krauss, Dr. Dog, Guster, Brandi Carlile, Joshua Radin, Gomez, and Xavier Rudd, the band garnered a considerable following that helped their second record to debut at #2 on Billboard’s New Artist chart (as well as climb to the top slot on Amazon.com and on iTunes’ Singer/Songwriter chart). Last spring, Good Old War widened that fan base by giving a much-talked-about performance at the 2011 Coachella Valley Music and Arts Festival. “We were playing first on Sunday, at about 11 in the morning,” Goodwin recalls. “On the way there we were thinking, ‘Aww, man—I hope people show up.’ And then we started playing and we looked out into the crowd, and it’s pretty packed and everyone just seemed pumped.”

In addition to honing those increasingly famed performance chops, Good Old War continually refines their sound by exploring a dizzying range of music genres. “Tim listens to a ton of electronic music, and Keith is really into composers like Cole Porter,” says Schwartz. “I’m more of a classic-rock guy, but we’ve all got an affinity for bands with a really strong focus on melodies, like the Beach Boys, the Beatles, Simon & Garfunkel, and Crosby, Stills and Nash.” But despite the diversity of influences on their songwriting, Good Old War purposely kept performances stripped-down and studio-flourish-free on Come Back as Rain. “For us, one of the most important things about the band is we can walk into any room and perform all our songs with only our voices and guitars,” says Schwartz. “And even though it’s acoustic, it’s not your typical folky kind of act—we’re here to make people dance and feel good and just have a really fun time.”