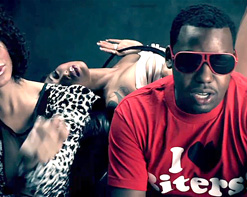 Hello programming friends! It’s Andy Gesner and the HIP Video Promo staff, here with a hip hop video that pulls out all the stops. Making his first major video appearance is West Coast rapper J Net, who put together an all-star team to make his mark on the music map for his shiny and glamorous “I Ain’t Cha Man” video.

J Net is a new rapper on the streets who is set on dominating the club scene with his upcoming debut My Party EP, produced by hip hop music man Rob E, the man behind “Hit Me On Twitter.” J Net’s leading single “I Ain’t Cha Man” is filled with a thumping beat and enough synth to get the dance floor moving into a frenzy. Though catchy synth is already a staple in the hip hop and pop community, what sets this song apart is J Net’s unique rhyme scheme. The flow in this track is a fast paced onslaught in the manner of Busta Rhymes, but with a unique tone that isn’t afraid to head for the weird, reminiscent of vocal adventures undertaken by Lil’ Wayne and Nicki Minaj. However, J Net didn’t stop there. As any aspiring rapper knows, the sound is half the battle and the other half is image and swagger. This is where J Net removes all the brakes, as he has put together a top notch production directed by music video mogul Rock Jacobs. Jacobs is responsible for music videos for Nelly, 50 Cent, Lil John, Ice Cube, Bow Wow, and Iyaz, just to name a few. The video features barely clothed models on expensive motorcycles with J Net at the center of this sex-ifyed universe. To add fuel to the fire, one of the models happens to be the Brazilian video vixen Carol Seleme, who has appeared as the leading role in videos for Snoop Dogg, Far East Movement, Lil John, 3OH!3, Pitbull and many more.

This is one hell of a way to make an independent debut. Hell, major label starters haven’t had this much torque in years, which is why the blogoverse is definitely taking notice. “I Ain’t Cha Man” has already swept the internet by storm, landing features on the front of sites like WorldStarHipHop, Purple City, Wii-Cast, We The West, and HipHopMotion. J Net has also been impacting his local club scene in Lakewood, CA, spinning his own creations at the venues in his neighborhood to get the floors shaking. With a video this shiny hitting video screens and his My Party EP the digital marketplace this summer/fall, there’s nothing stopping J Net from gaining a big chunk of the market.

We are very excited to be on the ground floor for an artist who is making big waves on his own terms. J Net is fresh and sensational, and his image polished to a blinding glow. We hope you will join forces with us to help this aspiring star gain his place in the hip hop constellation. If you need more info, call Andy Gesner at 732-613-1779 or e-mail us at info@HIPVideoPromo.com. You can also visit www.HIPVideoPromo.com and www.Twitter.com/JNetmusic to find out more about J Net.