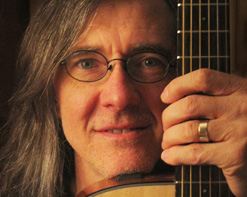 Earlier this year we brought you the debut clip from Texas native and longtime Seattle resident John Hickman, “Hello Hello.” After a longtime career as an Aerospace Engineer, he’s now fully retired and calls Maui, Hawaii his home. It was in the early 2000s that a spark was lit in Hickman’s creative mind, and once his wife bought him a guitar for Christmas, he dove right in to his musical career.

In September of last year, John Hickman released his debut album, Remnants, to much acclaim from the press. Vents Magazine called it a “stylistically nimble release” and while Hickman takes much influence from the Beatles, they also noted similarities to 80s progressive artists like Yes and Asia. Music Existence praised his “intensely human and deceptively large range” saying, “His vocals are capable of invoking all the energy necessary for great rock and roll, but he’s likewise quite capable of a much more careful approach appreciating the dramatic possibilities born from memorable phrasing.”

After the terrific success of “Hello Hello,” which included going Top 40 on the AC charts, “Cascade” comes as the follow-up clip to the piano-driven soft-rock track. Regarding the song, Music Existence praised the “inherent likability to his singing”, as his voice soars through the song’s technicolor soundtrack of memorable drumming and infectious synthesizer. If the “Hello Hello” clip showed the peace-loving and happy side of the 1960s and 70s, “Cascade” shows the decades’ psychedelic side, with animation by Micah Buzan. An oversized moon peeks through the mountains and various sea creatures float through space; all the while Hickman again appears in cartoon form, orbiting throughout the galaxy in a bubble.

It’s an absolute delight to be working with John Hickman once again, and we have a feeling your viewers will fully embrace the “Cascade” clip as they did with “Hello Hello” earlier this year. Please let us know if there’s anything else we can do to get this into your most cherished programming! You can find out more by calling us at (732)-613-1779 or emailing us at info@HIPVideoPromo.com. You can also visit www.JohnHickmanMusic.com for more info on John Hickman.

For info about other John Hickman music videos, click HERE