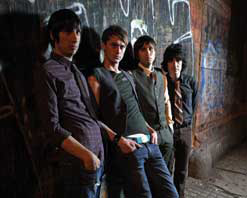 A big warm hello to all of my wonderful programmer friends! It’s Andy Gesner and the staff from HIP Video Promo coming back at you with another video from an artist about to explode on the national music scene! When we last sent you a clip from Jonny Lives!, the band was still very much a Downtown NYC phenomenon. Since then, the Gothamite quartet has earned international recognition, touring the country and the UK and earning raves in American and British publications alike. “Jonny Lives!”, crowed Barry Nicolson in the NME, is “pant-droppingly brilliant.” High praise from England’s most influential music weekly, and it’s been echoed stateside by a chorus of American newspapers, websites, and magazines. And as was evident on their US summer tour with Everclear, Dubowsky’s ‘tude-drenched vocals and crunching riffs play as well in Manhattan, Kansas as they do on in Lower Manhattan.

So does Get Steady, the band’s debut full length, back away a bit from the band’s NYC-centric roots? Not a bit. Dubowsky and company still draw inspiration from the seedy, glorious haunts of the Lower East Side; they’ve just got a remarkable ability to tell New York stories in a language accessible and identifiable to audiences worldwide. On Get Steady, they’ve gotten some help from local sources: Nick Valensi from The Strokes, Sammy James, Jr., of The Mooney Suzuki, and Jody Porter of the Fountains Of Wayne all appear on the album. But Dubowsky’s street-urchin poetry needs no adornment from famous friends – it’s as vivid and authentic as any postcard of the city.

With its tough-guy chorus and its pounding backbeat, “Get Steady” sounds like the perfect soundtrack for a night of debauchery. It’s no surprise, then, that the song appealed to the creators of National Lampoon’s Van Wilder, a movie about keeping the party going beyond all reasonable expectations. National Lampoon’s Van Wilder: The Rise of Taj hits theatres this autumn, and “Get Steady” has been made the flick’s hedonistic anthem, and it can already be heard in the trailer. We can’t think of a more appropriate band to help score a movie about teaching stuffy England how to get down – after all, they’ve recently returned from a UK tour that included a run of shows with the Kaiser Chiefs, a stop at the NME Music Awards, a bottle of tequila with Dave Grohl, cigars with the Kings of Leon, and a wrestling match with UK DJ femmes the Queens of Noize, where they did just that!

The Rise of Taj director Mort Nathan has returned Dubowsky’s favor by shooting the video for “Get Steady”, with Kal Penn (Harold & Kumar Go To White Castle, Superman Returns), star of the comedy, co-directing the clip. In the video, Penn reprises his role as the irreverent and sex-crazed Taj Mahal Badalandabad. Those who caught the first Van Wilder will remember that Taj came to America to learn how to party; schooled at the hand of master Wilder, he now heads across the pond to the fictional Camford University for further “studies”. Penn’s Taj takes his place in front of a classroom in an ivy-covered hall – and the first pedagogical act he performs is a literal trashing of the curriculum. The members of Jonny Lives!, all of whom play students, signal their approval. Things only get more raucous from there, as the Taj continues to instruct by example; before long, the classroom is a swirl of bikini-clad dancing girls, ice cream, and men in Bush and Blair masks. The dean shows up to order punishment, but Taj’s idea of discipline isn’t traditional detention – it’s a dominatrix librarian with a provocative way with a strawberry!

Here at HIP, we’re happy to be teaming up with Jason Spies and everyone at Eleven Seven Music to bring you this fantastic new video. Jonny Lives! will be on the road this fall, so please let us know if you would like to set up an interview, or would like copies of their debut Get Steady for on-air giveaways. If you need more info, call Andy Gesner at 732-613-1779 or e-mail us at info@HIPVideoPromo.com .You can also visit  www.10thst.com to find out more about Jonny Lives!

For info about the previous Jonny Lives! video, “Get Steady” click HERE