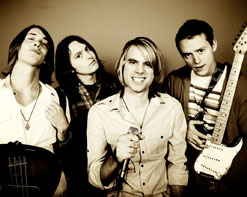 Greetings, programming friends! It’s Andy Gesner and the HIP Video Promo staff bringing you a double-dose of straight up entertaining videos from a brand new pop rock band that just formed last year. We’re talking about Loomis & The Lust, a band who’s all about having fun and showing that they don’t take themselves too seriously. You see two sides of this in their vids “A.D.D.” and “Barbarella.”

The first video, “A.D.D.,” is entirely set in an old school color television, complete with channel and volume dials. Channels are changing back and forth up until a technical difficulty frame featuring Loomis & The Lust hits the screen. The next thing you see is lead vocalist and guitarist Will Loomis infiltrating some of the most recognizable shows and infomercials, including Larry King Live,Saved By The Bell, Jeopardy, Barney and Star Trek. You also see Will Loomis creeping up from behind in a Sleepys commercial, a speech telecast with President Barack Obama and a basketball game. Of course, Will Loomis’ cameos stick out like a sore thumb, but it’s hilarious seeing him and his band in these unexpected backgrounds, especially when they’re full on rocking out toward the end of the video.

“Barbarella,” on the other hand, is a clip that’s sure to send you to outer space. This video is based in the band’s home turf of Santa Barbara. As the camera pans over the gorgeous beach and the fast-paced skate park, you see Will Loomis working hard on a boat, looking over to his peers at a life he wish he had with a significant other. A pod then shoots across the sky and into the ocean, where Will Loomis and his boss venture to check out the scene. Will Loomis reaches in and what emerges is an attractive girl who he sings is, “The queen of my galaxy.” Meeting her turns his world upside down as they embark on dates in the skate park and on the beach, where he learns that she’s an alien. Just as they are about to kiss under the midnight stars, figures covered in white gear from head to toe emerge to attack Will Loomis’ dear alien, and he – along with his boss who appears out of nowhere – fights for her honor. Before Will Loomis knows it, it’s time to say goodbye, and the pair share such an electrifying kiss that it convinces him to join her out in the galaxy.

“Barbarella” very much signifies the outer space nature of Loomis & The Lust’s music. It’s fun and lighthearted, much like the band themselves. And while we say Loomis & The Lust is a new band, they aren’t without their accolades already. MTV Iggy, an MTV brand focused on breakthrough music around the globe, named the quartet one of the “Top 25 New Bands in the World” and even had the band contribute a popular blog to their site. Most recently, Loomis & The Lust won the title of “Artist on the Verge” from OurStage.com and New Music Seminar. Critics from the contest hailed Loomis & The Lust’s “top shelf music that should make the band a household name.”

Who’s to argue with a band that’s earned such a reputation this early in the game. In fact, Loomis & The Lust is up to their second EP, Space Camp, which is set to come out this month. In it, you can find dance melodies, infectious hooks and, of course, “A.D.D.” and “Barbarella.”

Thanks to the crew over at King of Spain Records for bringing us this hit clip by Loomis & The Lust. They’ve set us up with copies of Space Camp for your enjoyment and giveaways, so please be in touch if you’d like to get your hands on some copies! If you need more info, call Andy Gesner at 732-613-1779 or e-mail us at info@HIPVideoPromo.com. You can also visit www.HIPVideoPromo.com or www.LoomisandTheLust.com to find out more about Loomis & The Lust.