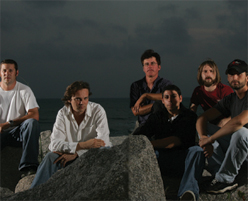 Summer salutations to all my friends and fellow music lovers, it’s Andy Gesner and the staff from HIP Video Promo! Let’s get to the point. Not only is “Trapped Underwater” the finest and freshest single to come out of The Majestic Twelve camp, its accompanying clip is among the best we’ve seen all year. Our friend and DIY stalwart Kenyata Sullivan has just proved that a resourceful indie has the ability to make art that’s just as vital and accomplished as acts on a major label.

We’re always thrilled to work with Sullivan and The Majestic Twelve, because we find his commitment to the indie aesthetic so commendable. Not only does he write, record and release his albums through his own initiative, but he’s been giving away copies of his latest, Schizophrenology, for free – anyone can download it from www.themajestictwelve.com. “Buy our stuff if you can afford it”, he offers in the liner notes, “but if you can’t, it’s cool”. It’d be an odd sentiment coming from most musicians, but from the guy who’s put his heart and soul into the Wilmington, North Carolina music scene and its globally applauded annual W.E. Festival, it seems altogether fitting.

Yet Sullivan’s largesse is so noteworthy that it can sometimes overshadow his fantastic body of work. Whenever we’re discussing The Majestic Twelve, we always have to remind ourselves not to dwell so much on Sullivan’s labors as a great rock and roll citizen that we forget to mention that Sullivan makes great rock and roll. Thankfully, this time around, he’s made it easy.

Schizophrenology is a departure for Sullivan and for The Majestic Twelve. The sound is far fuller and more nuanced than it’s ever been before, the arrangements are broader and more colorful (in addition to the usual guitar, bass, and drums, there’s banjo, analog synth, fiddle, and accordion on some of these tracks) and the songwriting has taken on a newfound sophistication. And while Sullivan has always been a politically-motivated writer, he’s found an argumentative voice onSchizophrenology fiery enough to burn a hole in your speaker. Songs like “Condoleezza, Check My Posse” and the heartbreaking “Whispering” balance intense conviction with good humor, and reveal Sullivan as a rueful rebel with a middle-finger for established authority, and open arms for everybody else.

Ringing with trebly guitars and synthesizer washes, “Trapped Underwater” is a Majestic Twelve track like no other. It sounds like a lost New Wave classic; an unearthed Chills song from the era of Submarine Bells. Sullivan’s lyrics hint at lust, suffocation, and loss of identity, and he sings the song in the voice of a man on the brink of dissolution. “Your fears are overtaking your perfect painted lips”, he purrs, and it sounds as if the wave of terror is about to crash right behind him.

The video is every bit as unsettling and affecting. Directed by Norwegian filmmakers Thomas Lien and Joachim Solum, it’s shot entirely underwater. Its protagonist is a man in a diving suit, busy on the bottom of some kind of a swimming pool, cleaning strange porthole windows. A torrent of air bubbles rises from his mask, but beyond that, his movements and activities seem halting and barely human. He emerges from a cage and stalks the pool floor, as bodies at play float above him in bathing suits and bikinis, unaware of his presence. Finally, he floats toward the surface, and seizes a diver by her ankle. She struggles, but he pulls her downward in a dark embrace, until they both disappear in the deep, behind a curtain of churning foam.

We are excited to bring you the latest incredible clip from The Majestic Twelve and the folks at Pandora’s Legacy.Schizophrenology is a must have and lucky for you we have enough copies on hand for all of your giveaway needs. If you need more info, call Andy Gesner at 732-613-1779 or e-mail us at info@HIPVideoPromo.com. You can also visit www.themajestictwelve.com to find out more about The Majestic Twelve.

For info about The Majestic Twelve’s previous video, “Livin’ On The Beach” click HERE

For info about The Majestic Twelve’s previous video, “I Don’t Have A Job” click HERE