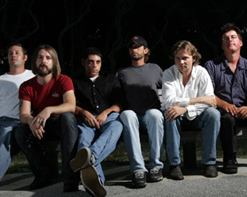 Greetings cherished music video programmers! It’s Andy Gesner and the HIP staff, back with another tremendous clip from a good friend and underground music hero. We’ve always counted on Kenyata Sullivan and The Majestic Twelve to defy expectation and to follow a singular vision – but lately, we’ve also been able to depend on the Wilmington, North Carolina indie stalwarts for spectacular music videos, too. Last year, it was our pleasure to promote the visually dazzling – and undeniably terrifying – clip for “Trapped Underwater”. Shot in a gigantic swimming tank with sub-marine cameras, the video followed the actions of a predatory deep-sea diver living on the floor of a swimming pool. By no means was this a typical indie video: the production values were high, the concept was even higher, and the emotional and aesthetic payoffs were higher still.

Now, Sullivan and his team are back with a new clip for “Break It And Breathe”, the second single from the independently-released and critically-lauded Schizophrenology, and we’re excited to report that The Majestic Twelve have upped the ante even further. The song is a painfully honest reflection on a suicide of a friend, but the accompanying clip is no downer; rather, it plays whimsically on notions of escape, alienation, and breakthrough, and does it all under brilliant spring sunshine. Also, since this is a Majestic Twelve project, there are men in robot suits, and men in space suits, and men in cowboy suits getting chased through the streets of Wilmington by a tribe of gorgeous Amazons, and candid shots of bemused (but always game) passersby. It’s an absolute hoot, it’s beautifully shot and convincingly performed, and it conjures that same sense of defiance, camaraderie, and celebration in the face of tragedy that we’ve always found in Sullivan’s music.

Directed in brilliant color by J.R. Stauffer of Broken Wings Productions (Ironclad, Breaking Benjamin), the “Break It And Breathe” clip crams a truly impressive amount of hijinx and mayhem into its three exhilarating minutes. The five spacemen stalking the North Carolina sidewalks are the members of the Majestic Twelve – we know this because of the frequent cutaways to a stiff young anchorman who reports that the band have responded to NASA cuts by taking a municipal trolley to outer space. (As he reads the news, a ticker under the headlines scrolls out in-jokes and other absurdities: as usual with Majestic Twelve videos, the “Break It And Breathe” clip is loaded with detail, and rewards repeat viewings.) Although the band stays earthbound, they do achieve weightlessness inside the bus, hanging on to the poles as they point out the window at stray robots and flying saucers that have crashed on the streets. The spot culminates in classic rock-video style with a street party thrown by The Majestic Twelve – only the bandmembers don’t take their space suits off! Instead, they rock the crowd – and the gathered robots – in full interstellar regalia, singing into the microphones through the plastic visors of their helmets.

Kenyata Sullivan has been one of the principal organizers of the annual Wilmington Exchange Festival (www.wefestival.com) since its inception over ten years ago. Whether he intends it to be or not, the “Break It And Breathe” clip functions as a fantastic advert for WEFest: the streets of the coastal North Carolina city look gorgeous and welcoming, the Cape Fear river is a dazzling blue, and the folks on the street appear to be game for all manner of good-natured weirdness. “Break It And Breathe” reminds us again that there’s no better place to be during Memorial Day Weekend than Wilmington, and no more gracious hosts than Kenyata Sullivan and The Majestic Twelve.

Here at HIP, we truly consider Kenyata and crew to be a part of the HIP family and we couldn’t be more thrilled about the opportunity to promote this, the fourth video by The Majestic Twelve! As always, they have hooked us up with plenty of copies of Schizophrenology and other M12 goodies for you and all of your on-air giveaway needs! If you need more info, call Andy Gesner at 732-613-1779 or e-mail us at info@HIPVideoPromo.com. You can also visit www.TheMajesticTwelve.com to find out more about The Majestic Twelve.

For info about The Majestic Twelve’s previous video, “Livin’ On The Beach” click HERE