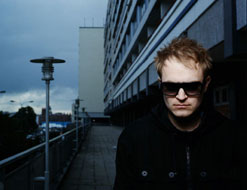 Hello everybody! It’s Andy Gesner and the staff from HIP Video Promo, back with the latest hallucination from James Chapman and maps. A giant golden eye fills the screen, throbbing, pulsing, approaching the camera, receding for a few seconds only to come charging back toward the viewer. The pupil spins, like a record or an upside-down cymbal, drawing the viewer closer, and throwing yellow-orange light back toward the camera. Periodically, the huge eye “blinks” – a cardboard shutter briefly obscures the lens – but most of the time, it’s monomaniacally steady. For twenty seconds, the eye dominates the “I Dream Of Crystal” clip; it’s commanding, mesmerizing, weirdly unsettling. When maps (always lower case) frontman and songwriter takes the screen and starts to sing, his face is exactly where the eye had been. It’s a telling superimposition: as all psychedelic rock fans know, Chapman’s music casts the same sort of psychic spell that a hypnotist might.

That magic explains much of the anticipation for Turning The Mind, the soon-to-be-released follow-up to maps’s heralded (and Mercury Prize-nominated) We Can Create. Chapman has promised fans a wilder, rougher ride, and if “I Dream Of Crystal” is in any way representative of the new record, he’s delivered. It’s a kaleidoscope of a song, sharp and intoxicating; once heard, it’s not easily forgotten. James Chapman’s performance is, as always, welcoming, but there’s an acid edge to his voice that portends an eventful trip. Long-time listeners will recognize “I Dream Of Crystal” as the logical extension of ideas developed on We Can Create: the dark side of that album’s crazed whimsy.

Music as trance-inducing as maps is well-suited to striking visuals, and Chapman has always matched his songs with fantastic videos peopled by unforgettable characters. Some aren’t even human: consider, just for instance, the gigantic ballet-dancing mannequin in the “You Don’t Know Her Name” clip, or the weird, impassive egg that presides over the otherworldly “To The Sky” spot. That said, James Chapman has always been his own best character. For a psych-rocker, he’s remarkably identifiable: a gifted-but-humble Everyman in possession of uncommon talents. Sure, his aim is to entrance his audience – but if he didn’t appear so trustworthy, he wouldn’t have been able to take his place as rock’s premiere hypnotist.

Chapman spends most of the “I Dream Of Crystal” clip just below the center of the frame. He looks back at the camera just as the swirling eye does – at first in a steady, unbroken gaze that communicates authority and control. But then his own lids begin to get heavy, and it becomes apparent that he’s just as hypnotized as his audience. Meanwhile, worlds are shifting: different colored filters are thrown on his face and on the wall behind him, and sometimes, he’s captured in shadow. And the arresting eye reappears, this time in a wash of vibrant color. It’s captured the maps frontman, it’s captured the “I Dream Of Crystal” video, and by the end of the clip, it’s likely to have captured your mind, too!

It is a true pleasure to be working with Mute once again to bring you the fourth amazing video from the talented maps. If you need more info, call Andy Gesner at 732-613-1779 or e-mail us at info@HIPVideoPromo.com. You can also visit www.Mute.com to find out more about maps.