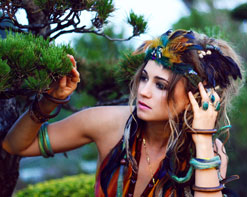 Milana May is an unconventional singer-songwriter/producer from Siberia, Russia. Described as “The Siberian Icebreaker” she broke through all resistance, limitations and old programming and gave birth to her own current innovative sound that blends different kinds of dance music music with a shamanic, mystical, raw, lore vibe. Likewise, her lyrics are multilayered, melding the lifestyle concerns of a hip, young, urban New Yorker with the esoteric symbolism of folk mythologies.

With her last single for “Joy,” Milana flexed her musical muscle and showcased her unique upbringing as the daughter of classical musician coming of age in a post-Soviet era and rapidly infusing herself with pop music and western culture. With literally a world of influences at her disposal, she ultimately crafted a sound that is rooted in the EDM and downtempo world but also isn’t afraid to inject a broad range of influences.

Her new single, “Crazy Boy,” is a slow burn with an infectious, jazz-infused push beat holding down the fort. There’s enough layers to make even the most devoted classical music fan take note, but it’s really all about Milana’s sizzling vocal performance. The main melody is a brilliant palette, and the alternating harmonies and call & answers soak the vocals with a delicious layer of color and vibrance.

“Crazy Boy” uses the urban jungle of New York City as the setting to tell her tale of the ups and downs of life with her own crazy boy. Whether it be the southern tip of Coney Island, the streets of SOHO, the banks of the Hudson beneath the George Washington Bridge, or riding the famous NYC subway, Milana and her man make the city their own personal playground.  Director Alexey Figurov does a masterful job of creating a visual that simultaneously captures the overwhelming grandeur of the city while also finding those intimate moments that occur each moment of every day. Even with 8 million inhabitants within its borders, these two still seem to make it feel like they’re the only two people on earth.

It’s our great pleasure to have the opportunity to work with such an illustrious, talent such as Milana May. Her hustle is inspiring and her music breathtakingly beautiful. We are committed to get whatever you need to include this video in your programming, so please don’t hesitate to get in touch and we’ll make it happen! Please contact Andy Gesner and the HIP Video Promo team at (732)-613-1779 or email us at info@HIPVideoPromo.com. You can also visit www.MilanaMay.com for more info on Milana May.

For info about other Milana May music videos, click HERE