Mink “Get It Right” 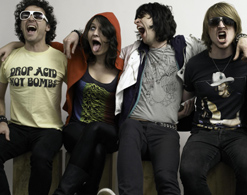 Greetings fellow music video fanatics! It’s Andy Gesner and the staff from HIP Video Promo! We here at HIP have been doing this long enough that we feel comfortable offering the occasional generalization about making videos. And one thing we’ve noticed over the years is that when a bandmember directs the clip, the result is always tremendous fun. That’s not to say that we don’t value the contributions of experienced outside directors – it’s simply to acknowledge that the in-house option often has the best understanding of what it is that makes a particular band connect with its audience. The four members of Mink have collaborated with some of the best and highest-profile videomakers in the world – you’ll remember that their last clip (for the raucous “Talk To Me”) was directed by Christian Lamb, who has shot videos for Madonna, Kelly Clarkson, and Coldplay. But they’ve turned the camera over to bassist Grant Fitzpatrick for their latest effort, and he’s made “Get It Right” a nonstop hoot and a celebration of everything that makes Mink so irresistible.

Then again, when you’re working with musicians as telegenic – and enthusiastic – as Mink, it’s hard to go wrong. The transcontinental quartet (three Australians, one American, and fans all over the world) are inspired amateur filmmakers, posting video excerpts of shoots, gigs, and assorted hijinx to a YouTube channel titled MinkTV. In their clips, they’re eminently watchable, performing with staggering energy and visible personality. Unsurprisingly, given their taste for spectacle, they’ve become big in Japan and they’ll be making their Japanese debut by appearing at Fuji Rock Festival ’08 alongside The Go! Team, My Bloody Valentine, and Hard-Fi.

They’ve made names for themselves stateside, too, and their American profile is growing. Mink has toured the states with Perry Farrell’s Satellite Party, opened shows for Angels & Airwaves, headlined at the hippest Brooklyn clubs, appeared at Lollapalooza, and placed songs on weblogs and radio playlists across the country. “Get It Right”, the latest single, was featured in the most recent episode of House. Their songs feel classic: bruising big-riff garage-rock indebted to the Stones and the Stooges, but slavishly imitative of neither. Singer Neal Carlson pouts and sneers his way through these urgent and infectious rock cuts, bleeding attitude as he does.

Carlson is entertaining to watch, and Fitzpatrick and guitarist Nick Maybury are awfully compelling, too – but drummer Stella Mozgawa steals the “Get It Right” video. Explosive behind the kit and gloriously spazzy in action shots, she’s the group’s not-so-secret weapon; a pint-sized, tongue-wagging dynamo with a knack for dramatic gestures. And just like the rest of the band, she looks good in superhero tights. Yes, Grant Fitzpatrick has cast the members of Mink as caped crusaders, battling a gang of costumed evildoers on the streets beneath the Manhattan Bridge and the boardwalks of Coney Island. There’s mysterious masks, safety goggles, acrobatic and occasionally hilarious play-fighting, and even a carrot used as a cellphone. Much of the footage is intentionally sped-up for comic effect, much as it would be in a live-action Saturday-morning special. And regardless of how much fun they’re all having – and how much chaos they’re generating – the members of Mink take pains to reconstruct some famous shots from Help! It’s a tip of the cap to the band’s classic roots, and a reminder that music video wasn’t always so serious. .

It is our great pleasure to once again be a part of the Mink promotional team and want to thank Mori Ninomiya for making it happen. If you would like to catch up with the band the next time they are through your market, please drop us a line and let us know and we’ll make it happen. If you need more info, call Andy Gesner or Rob Fitzgerald at 732-613-1779 or e-mail us at info@HIPVideoPromo.com.

For info about Mink’s previous video “Talk To Me”, click HERE