Minus The Bear “Knights” 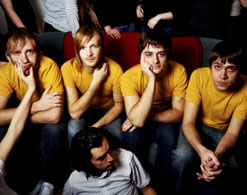 Greetings to all my brethren in music video land! It’s Andy Gesner and the staff from HIP Video Promo with another jaw-dropping clip from Minus the Bear. We’re always impressed by musicians who defy genre categories and forge something unique and memorable, and Minus the Bear have been following their own impulses and releasing engrossing, unclassifiable albums since the beginning of the decade. They’re indie, but approachable and identifiable; progressive, but playful; math-y, but never rigid; electronically inclined, but dedicated to the electric guitar as the core of their sound. Where other bands strum or blast away at power chords, the six-string visionaries in Minus the Bear favor intricate patterns, fretboard tapping, looping and sampling. What excites us most is that the world is beginning to catch on:Menos El Oso, their last album, proved their most popular yet, andInterpretaciones Del Oso, a collection of imaginative remixes ofMenos songs by adventurous producers, was enthusiastically received as well. The upcoming and eagerly anticipated – Planet Of Ice promises to establish the quintet as one of the leading lights in experimental indie rock.

Recorded at Robert Lang Studios and Red Room with former keyboardist Matt Bayles – who has produced albums by Mastodon, Fall of Troy and The Blood Brothers – and Chris Common (These Arms Are Snakes, Mouth Of The Architect), Planet of Ice shows the band allowing negative space and an airy openness to permeate their music; from the distinctively danceable opener “Burying Luck” to the syncopated sample-driven “Knights” to the album’s epic 9 minute closer “Lotus,” which evokes acts like Yes and Pink Floyd, minus the self-indulgent tendencies. It’s also hypnotically catchy, and features some of the band’s most emotionally revealing lyrics: never before has singer Jake Snyder sounded so determined to connect with his audience. The addition of full-time synth player Alex Rose has expanded the band’s sonic palette – his cool electronic textures are sophisticated and assured, and perfectly integrated into Minus the Bear’s heady rock. “Knights”, the first single, might be the quintessential MTB song: deft two-hand tapping by lead guitarist Dave Knudson, brisk pacing from the rhythm section of Erin Tate and Cory Murchy, and a supple lead vocal by Snyder. No note is wasted; everything is in place, precise, pointed, and dangerously incisive.

Keith Schofield has made a career of matching bands’ songs with visual images that suit them: his clip for Death Cab For Cutie’s “Jealousy Rides With Me” is warm and radiant, the Notwist’s “One With The Freaks” is weird and supernatural, and clever Wintergreen’s “When I Wake Up” becomes a cheeky meditation on “Atari’s worst videogame ever”. His video for “Knights” highlights the mathematical elements of Minus the Bear’s music – but does so lightheartedly, entertaining the viewer with repetition, parallel action and optical illusion, and sudden breaches of symmetry. Schofield divides the screen into two mirror images, and then moves his camera, warping the perspective as he does. Things disappear into the center of the screen, duplicates emerge, and odd, striking hybrid shapes are formed. Objects emerge from the middle of the frames, one after another, in time with the guitar riffing, as if Knudson’s staccato tapping is generating physical matter. He mischievously sticks his guitar into the midline, and saws it back and forth, again in time, as if he’s playing tug-of-war with himself. But not everything in the “Knights” clip is mirrored: in fact, members of Minus the Bear travel from one side of the frame to the other, confounding expectation and adding to the dizzying quality of the clip. Like the band’s music, the video is structured but improvisatory: there is chaos in the plan, madness in the science, and strange variables lurking within the formula

Minus the Bear has done it again, and we are stoked to be back in the saddle once more, working with the fine folks at Suicide Squeeze on this remarkable video. This is the third video we have promoted for this deserving band, and we saw first hand how video programmers far and wide embraced the first two. You can catch the band out on tour this fall as they bring their stellar sound from coast to coast. If you would like to set up video interviews or IDs with this burgeoning band, don’t hesitate to let us know! If you need more info, call Andy Gesner at 732-613-1779 or e-mail us at info@HIPVideoPromo.com. You can also visit www.SuicideSqueeze.net or www.MinusTheBear.com to find out more about Minus the Bear.

For info about Minus the Bear’s previous video, “The Game Needed Me” click HERE

For info about Minus the Bear’s previous video, “Pachuca Sunrise” click HERE