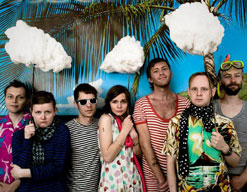 Hey music fans! It’s Andy Gesner and the staff from HIP Video Promo, presenting a remarkable new clip from a visionary act. Reykjavik-based múm are known for their inspired departures from expectation, but in their latest video, they’ve outdone themselves. The “Sing Along” clip is a twisted fable, a daydream gone off the rails, a bizarre and evocative conjuration, a powerful Nordic hallucination pregnant with symbolic significance. Set in the verdant hills and farms of Iceland during an endless summer, it follows an unlikely couple that has received from the gods (or some other aerial spirits) a strange and mysterious gift. This is no gauzy fairytale, however: the cinematography is motion-picture crisp, and the images of the countryside are gorgeously rendered. Mind-blowing the “Sing Along” video surely is, but not because of any camera tricks or blurred focus – it’s the things that happen during this four-minute story that produce such trippy effects.

And you could say something similar about múm’s celebrated music. The Icelandic combo’s palette of sounds doesn’t seem particularly unusual: gently-echoed male and female voices, acoustic guitars and mandolins, vintage synthesizers and drum machines, muted brass and sweet strings. Yet the band arranges these elements in strange and wonderful ways, taking listeners on aural journeys both surprising and revealing. It wouldn’t be inaccurate to call the band “experimental”, but nothing about múm is forced or self-conscious. Instead, their sonic reveries feel completely natural – the product of fevered imaginations and singular talents. Go Go Smear The Poison Ivy, their ’07 release, took American audiences by surprise: here was a record that, while still discernibly pop, sounded nothing like any other release in general circulation. The All-Music Guide raved about the set, praising the album’s “ominous twists” and “gently rolling melodies”, and likening the feel of the set to that of the darkest part of an enchanted forest.

Sing Along To Songs You Don’t Know, their latest release, will only compound the intrigue. Lead single “Sing Along” rides the divide between sprightly and menacing; it is gorgeous and strange, and the more you’ll play it, the deeper it will draw you into its glittering mystery. The hypnotic sound of “Sing Along” seems to demand a video as odd and marvelous as the one we’re sending you today – a clip that feels drawn from some forgotten Nordic mythology. The farm couple (a fetching young woman and a man who could be her grandfather) begins in a terrible mood; they stand on the Icelandic heath as a shaman, arms outstretched, implores the heavens for response. Soon, the body of a stag descends from the sky on a bed of flowers and floating earth. They drag the gift home, and as they do, the immobile animal begins to sing with them. The presence of the stag transforms their lives: suddenly, they become giddy, wearing startling masks and playing like children in the partially-open farmhouse. But all doesn’t stay well – the old farmer’s fortunes change, and when it does, his young companion’s relationship to the buck twists, too. She carries it through the countryside, as if to destroy it, but when she turns a medieval broadsword on its exposed neck, butterflies pour out of the wound. Finally, she tosses the stag into the bonfire, where, undaunted, the animal continues to sing along.

We are thrilled to be working with the good folks at Euphono Records, who are bringing you another excellent video with “Sing Along”! múm’s also beginning a month-long tour that spans both coasts starting October 2, so if you want to setup interviews or video IDs when they come through your market, let us know and we will do our best to facilitate a meetup. If you need anything múm related, don’t hesitate to drop a line! If you need more info, call Andy Gesner at 732-613-1779 or e-mail us at info@HIPVideoPromo.com. You can also visit www.mum.is to find out more about múm.

For info about múm’s previous video, “They Made Frogs Smoke ‘Til They Exploded” click HERE