Patent Pending “One Less Heart To Break” & “Dance Till We Die” 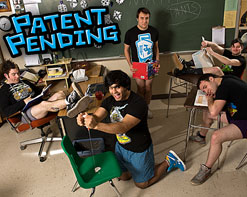 Ladies and gentlemen, programmers of all-ages: prepare to be moved. This is Andy Gesner of HIP Video Promo with a dramatically powerful and deeply emotional clip from Long Island, NY’s Patent Pending. In collaboration with To Write Love On Her Arms – a non-profit group dedicated to providing hope and help to people struggling with depression, addiction, self-injury and suicide – the usually fun-loving, good-time pop-punkers of Patent Pending have chosen the epic and weighty “One Less Heart To Break” for their latest video and single. Singer Joe Ragosta calls it the “most serious” song he’s ever written. It may also be his best.

For the past several years Patent Pending has been steadily ascending the ranks towards pop-punk royalty, with countless nationwide tours and festivals, several music videos on MTVU, Fuse and Much Music, and a string of quality records, including their latest CD/DVD I’m Not Alone. Their infectious, anthemic take on the genre exudes creativity, positivity, and energy. WIth an arsenal of killer hooks, and loads of memorable, sing-along lyrics, the band has earned a rabid fanbase from coast to coast and around the globe.

With “One Less Heart To Break,” Patent Pending aim to transmit a serious message to all of their beloved fans: you are not alone. The video – a stunning production by director Dan Kennedy – focuses on the stories of a young woman and a young man each reaching the end of their respective ropes. Both of their lives take severe turns, and the choices they make have serious repercussions for themselves and their loved ones. Through it all, the band provides the perfect soundtrack with Ragosta detailing their struggles in each verse before exploding into the powerful chorus, singing “It’s the up’s and down’s of living life this way / Promise me you’ll never go away.” The video culminates as a throng of mourners standing shoulder-to-shoulder in a candlelight vigil watch the band play as a hard rain falls. The effect is haunting and hopefully it will encourage those in need of help to seek it.

As a bonus – because Patent Pending loves you so much – they have also included a second video for another song from “I’m Not Alone.” In the clip for the ironically-juxtaposed “Dance Till We Die,” director Dan Kennedy films the Patent Pending boys and a crowd of fans in full undead, zombie makeup for this pop-rock romp that finds Ragosta in a more carefree mood as he gets his Thriller on, so to speak. Though vastly different, both videos are quality captures of one of the best bands making music in today’s American pop-punk scene.

We are thrilled to be spearheading the exposure of one of the hardest working bands around and HIP favorite like Patent Pending and we hope that you will find both clips to be welcome additions to your Spring programming. We’re here to hook you up with all things Patent Pending, including copies of I’m Not Alone, so please don’t be shy! If you need more info, call Andy Gesner at 732-613-1779 or e-mail us at info@HIPVideoPromo.com . You can also visitwww.Facebook.com/PatentPendingMusic to find out more about Patent Pending.

Or for info on Patent Pending’s video, “This Can’t Happen Again” click HERE