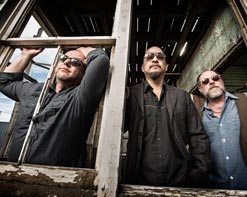 Few rock bands — even legendary ones — can boast about a shadow as long as the one cast by Pixies. In sound and attitude, the New England group anticipated the alternative revolution of the 1990s, and inspired countless imitators to pick up guitars and fashion spiky, artful, catchy songs from the detritus of gonzo pop culture. Famously, Kurt Cobain called “Smells Like Teen Spirit” a Pixies homage. He was hardly the only one then paying tribute in heavy rotation on mainstream radio.

Much in the pop landscape changed between the release of Trompe Le Monde, the Pixies 1991 set made before a long period of dormancy, and Indie Cindy, this year’s heralded full-length return. Yet one thing hasn’t altered — and that’s the reverence that musicians and fans alike have for the band. Indie Cindy finds Pixies recharged, energized, and updated, but with the elements that made the group beloved in the first place front and center. Black Francis’ cryptic lyrics and cracked delivery, Joey Santiago’s hot-wired guitar leads, and David Lovering’s funky, manic, muscular drumming: it’s all back, as fierce and uproarious as ever.

That said, Pixies are the rare band that doesn’t have to release any new material to stay relevant. The ongoing love affair between musicians, fans, and the Pixies discography insures that the vintage stuff plays like it could have been recorded yesterday. Consider the homemade clip by Lital Mizel and Adi Frimmerman for “Hey”, a song originally released on the now-classic 1989 Doolittle album. Mizel and Frimmerman uploaded their lip-synched version to YouTube in 2005, and drew more than 33 million views. Part of that popularity had to do with Mizel and Frimmerman themselves. Their bedroom performance was indisputably fetching. But it wouldn’t have been a runaway YouTube hit were it not for the indelibility of the Pixies song and the Pixies sound.

Shrewdly, the band has tapped Mizel and Frimmerman to direct the clip for “Ring The Bell”, the latest single from Indie Cindy. This time, they’ve got a budget to match their imaginations, and they’ve crafted a video that plays with notions of nostalgia, revelry, and intergenerational communication. The pair raid an abandoned building for toys and tokens of the recent past: glow sticks and cassette tapes, big, early MTV-style sunglasses and mirror balls. Then it’s on to a sanctuary in the woods, where the directors and their friends demonstrate that fun belongs to no particular era.

Please get in touch if you’d to get a copy of their new album Indie Cindy or anything else we can do to help out! For more information on this legendary band, please contact Andy Gesner and the HIP Video Promo staff at (732)-613-1779 or email us at info@HIPVideoPromo.com . You can also visit www.PixiesMusic.com for more info.

For info about Pixies’ “Greens and Blues” video, click HERE