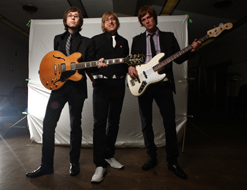 Hello! It’s Andy Gesner and the staff from HIP Video Promo, here with a pair of clips from an exciting trio with a seismic sound. Detroit has earned a reputation for producing direct, no-nonsense rock bands – ones who write straightforward, melodic, absurdly-catchy songs played with punk energy and near-religious fervor. The Singles didn’t make that reputation, but as one of Motor City’s premiere acts, they’ve certainly done their part to sustain it. Detroit went wild for Start Again, their most recent release, and for good reason: it established the young musicians as natural heirs to the hometown tradition of first-rate garage-pop. Since Start Again, the band has lived up to their handle, releasing a series of singles to increasing acclaim and further endearing themselves to Detroit’s enormous rock underground. This summer, they’ll be presenting a series of gigs with the influential and popular Real Detroit Weekly; each will showcase emerging Motor City talent, and each will by headlined by The Singles themselves.

In a canny bit of marketing, The Singles have dubbed the series “Can You Go Out, Detroit?” – a direct reference to the group’s latest song. “Can You Go Out Tonight?” is quintessential Singles: scruffy garage-rock hooks, chiming guitar, basement beats, and Sixties-inspired vocal harmonies. It’s a clever come-on with a chorus worthy of Carnaby Street, and frontman Vince Frederick sings it with unmistakable glee and no small amount of mischief in his voice. He’s a persuasive tour guide and an unrepentant provocateur; he promises fun, and along with his bandmates, he’s prepared to deliver.

In short, Frederick is a character – and that’s apparent in all the videos by The Singles. The “Can You Go Out Tonight?” video finds Frederick after a girl; and not just any girl, either, but one of the prettiest in town. He chases her all over the sidewalks, not taking “no” for an answer, plying her with flowers, drinks, guitar solos, whatever he can muster. She’s got her rebuffs prepared for all of his overtures, but he’s got a secret weapon, too: the other members of The Singles, who appear around every corner, harmonizing with him, adding some melody to his muscle. Finally she breaks down and attends a Singles show – and even after she’s finally and fully smitten with Frederick, the singer still has more tricks up his sleeve.

The “Can You Go Out Tonight?” clip was directed by local filmmaker Christopher Chynoweth; it’s something of an encore performance, since Chynoweth and The Singles aren’t strangers. The trippy clip for “Don’t Need Your Love” was the first fruit of their partnership, and we’ve appended the (slightly) older video to this reel. Chynoweth captures The Singles in action, in a brightly-painted house crammed with kitschy pop-culture artifacts from the Sixties and Seventies. The trashy b-movie posters on the wall, the vintage tchotchkes on the mantelpiece, the décor in the bedrooms and living rooms: it’s all aesthetically consistent and deeply suggestive of the same time and place that The Singles’s music evokes. In this house, Frederick sings to the camera – and then to a perfect replica of himself, who returns the favor. The other Singles have their own dopplegangers, too; they converse with their doubles, clink beer bottles with them, even wrestle with them. The musicians’ movements are slightly mechanical and artificial – and after so much replication, the humans begin to take on the characteristics of artifacts themselves!

We’re very excited to be working with the fine gents in The Singles to bring you these finely produced clips. If you need more info, call Andy Gesner at 732-613-1779 or e-mail us at info@hipvideopromo.com.
For info about The Singles’ “He Can Go, You Can’t Stay” video, click HERE