The Soviettes “Multiply And Divide” 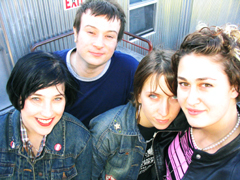 Greetings to all my pals in the music video community! It’s Andy Gesner and the staff from HIP Video Promo, hoping you and yours had a terrific Independence Day weekend. Here at HIP, we’re looking forward to a summer filled with red hot music from our favorite artists. It’s been our great pleasure to work with The Soviettes on their previous two videos, “Land Of The Clear Blue Radio” and “#1 is Number Two”. They are truly among our favorite people. Now they’ve got a new label, a new album, and a new video; and we’re thrilled to be bringing you the latest clip from the Minneapolis candy-punk quartet. Any Soviettes song is bound to generate delirium – and “Multiply And Divide” is their most explosive yet. It’s the lead single from the brand new and bluntly-named The Soviettes LP III, and it buzzes and stings like a yellowjacket.

Fans of the group know what The Soviettes’ music is all about: pop-punk hooks, shouted back-and-forth choruses, big beats, fuzzed-out rhythm guitar, and loads of attitude. At once more melodic and more adventurous than the average indie-rock contender, The Soviettes walk the thin line between underground raunch and radio-ready pop fizz with acrobatic skill. This is party music for sure, but it’s never just mindless fun: behind the tales of late-night drinking, seedy bars, and cheap romance are pointed observations about youth culture. And relentless touring has turned the quartet into one of the most ferocious combos on the punk circuit.

The Soviettes LP III displays both the group’s growing musical excellence and the increased sophistication of their subject matter. Thoughtful songs like the compassionate “Thinking About You” and “Middle Of The Night” – a troubling story about a transsexual forced into prostitution – sit alongside drink-along stompers like “Do The Stagger”. The group’s political consciousness has always been apparent, but it’s even more developed here: “Multiply And Divide” is a brash and emotionally affecting challenge leveled against the political establishment. It also takes arithmetic as its central metaphor – something that singer and writer Sturgeon, who proudly outs herself as a mathematics instructor on The Soviettes website, surely knows a thing or two about.

It’s safe to say that your math teacher never looked so good. The Soviettes are one of the most appealing groups in indie rock to watch – and that’s not just because they’re sexy. The quartet visibly exudes electricity, attitude, and magnetism, and they approach the camera with punk-rock sneers and aggressive stances. They’re also all terrific dressers: they sport day-glo wardrobes, tiger and leopard prints, Bananarama-style face paint and dyed hair without ever looking like Eighties nostaligiacs. In Soviettes videos, the band is often shot from low angles, like cartoon superheroes towering over the lens. It’s an effective gesture, but it’s also slightly redundant – The Soviettes couldn’t look unimpressive if they tried.

The clip for “Multiply And Divide” is a blur of bright colors and quick cuts, a whirlwind of punk rock energy, a revelation. The band is shot in tight quarters: they play alternately in a checkerboard room, a box that resembles a red cage, and a cubby decorated with images of the American Flag and mathematical symbols. Not that you’ll notice the walls the first time you see the clip: Sturgeon and the group are so visually entertaining that they overwhelm even the most vivid surroundings. Interspersed with the performance footage are quick, lurid, near-subliminal shots of tanks, flags, division symbols, and exhortations to “Go!” and “Fight”. Hemmed in on all sides by symbols, The Soviettes kick at the walls, as if their demands for change and action are too passionate to be contained.

We couldn’t be happier than to be working with Brian Archer and his fine team at Fat Wreck Chords to be bringing you “Multiply And Divide”. We will have stacks of The Soviettes LP III for on-air giveaways. In addition, the band will be touring throughout July, so if you’d like an interview or a video ID when they come through your area, let us know and we’ll be thrilled to set it up. The Soviettes are a must see live band! If you need more info call Andy Gesner at 732-613-1779, or email info@HIPVideoPromo.com. You can also visit www.FatWreckChords.com or www.TheSoviettes.net at the links below to find out more about The Soviettes.