The Stills “Lola Stars And Stripes” 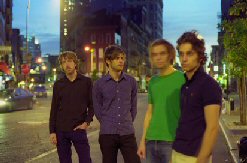 Hi, everybody! It’s Andy Gesner and the staff from HIP Video Promo. Today, we’re thrilled to bring you “Lola Stars And Stripes”, the first video from a band we’re sure you’ve heard a lot about – The Stills. This four-piece had been receiving plenty of media attention even before the release of their debut album Logic Will Break Your Heart. Photogenic and stylish, The Stills stood at the forefront of a new surge of New York City bands that incorporated the dark atmospherics of The Chameleons, Head On The Door -era Cure,and early Echo And The Bunnymen into the pop song format. Logicsolidified that approach, and upped the ante: adding melodicism, muscular radio-ready guitars, and earnest,heartfelt lyrics to the sonic tapestry, The Stills authored one of the best-loved albums of the Neo-Wave revival. Sturdy enough to withstand the demands of commercial radio, and hip enough to excite the downtown crowd, the group became the latest ambassadors from the Big Apple to the world.

But are The Stills New Yorkers? Sure, since just about everybody making music in the New York scene came from someplace else. But only temporarily. They still make their permanent homes in their native Montreal. And if they’re a little more wide-eyed than their peers, they communicate a freshness and candor unusual for five-borough rock. On Logic Will Break Your Heart, the band sounds simultaneously enthralled and alarmed by their new home — and they’re able to offer an outsider’s perspective and a winning vulnerability that so many other city groups cannot or will not affect.

The video for “Lola Stars And Stripes” – the kickoff track on Logic – explores the group’s complex relationship with New York City and the fear and anxiety that go hand in hand with living in the age of terror. Here, the streets are portrayed as a place of constant exhilaration and inexplicable danger, an arena where any sunny stroll along the sidewalks may suddenly turn into a blind run for cover. Color footage of the band on the avenue bleeds into black and white images of those same streets, a wild irruption of hand-drawn flame exploding from manholes and sewers, and pedestrians fleeing subway stations in panic. The Stills walk from block to block, their stride interrupted from time to time by the surreal fire. Singer Tim Fletcher won’t let his forward momentum be broken, but he appears a little apprehensive throughout. Like many New Yorkers, he’s finding the demands to return to normal life after unexplained explosions – he walks straight, but he looks out of the corners of his eyes.

Yet on closer examination, the sudden bursts of flame aren’t random happenstances. They correspond to guitarist Greg Paquet’s blasts of treble-drenched guitar: They occur between choruses and verses, and are timed to correspond to the most expansive parts of the song. So in a sense, the Stills are actually generating the fire; if New York City is dangerous and disorderly, they’re contributing to that excitement and chaos. The Stills are outsiders, true; still a little wary of their adopted milieu, and still prone to getting laid flat by its tremors. But they’re participants too – they’re stirring the drink, making the residents stream into the streets in the euphoria of confusion.

This isn’t to de-emphasize the content or the intention of “Lola Stars And Stripes”, or the video’s sympathetic examination of a city attempting to regain its equilibrium after each orange alert and false alarm. “Lola” is an overtly personal take on a worldwide political situation – the insecurity that comes with a constant state of edginess. If the language is, in places, pessimistic, its prognostications are undercut by its own hysteria: who hasn’t, in the last four years, felt that it was unlikely we’d “make it through”? Always clever, The Stills poke fun at their own dystopic worldview with a well-placed reference to Radiohead’s classic video for “Just”.

VICE Recordings and HIP Video Promo are proud to present the “HIP Add-VICE” contest. Any programmer that adds The Stills “Lola Stars and Stripes” video during the months of July or August will be entered in a drawing to win a super cool VICE Prize Package. The package will include copies of Limited-edition UK Stills singles and autographed Logic Will Break Your Heart LPs. The package will also include discs from Chromeo, music from new VICE signings Panthers, Vietnam, and Death From Above 1979, Yes NY discs, a Triple 5 Soul DJ bag and copies of the critically acclaimed VICE Magazine. The drawing will take place August 31st.