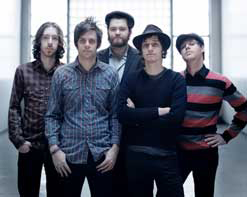 Hello fellow music video lovers! It’s Andy Gesner and the staff from HIP Video Promo back with another outstanding clip for your viewing enjoyment! Think you know what The Stills sound like? Guess again. Anybody who thinks they’ve got this quintet pegged as a moody Brooklyn post-punk revival act will be amazed by Without Feathers. The Stills have streamlined their sound and opened up their songwriting to classic Sixties influences, and have crafted an infectious set of dynamic pop songs far more reminiscent of Supergrass or the Spinto Band than Interpol or Echo & The Bunnymen. The group’s lyrics have transformed, too: the Montreal expats are now writing with a newfound maturity, and the authenticating mark of experience is evident in their storytelling. It’s still easy to understand why this group drove hipsters and webloggers into a frenzy in 2003. But modern alt-rock is now merely the starting-point for The Stills’ newly-sophisticated musical imagination. The new version of the band has embarked on a headlining national tour of their own – one that will keep them busy almost every night in June, cris-crossing the Eastern and Midwestern states from Hoboken to Fort Lauderdale to Madison, Wisconsin.

None of this is to suggest that the spirit and energy that made Logic Will Break Your Heart an underground sensation – and that placed “Lola Stars And Stripes” in the UK top 40 – has dissipated. On the contrary: Without Feathers is looser, sharper, and decidedly more fun than the band’s debut. The arrangements are more varied, the instrumentation is richer, and the performances are both more energetic and more nuanced. Touring synth player Liam O’Neil has been made a full-time member of the group, and his rich electric piano and organ textures push the Stills even further towards Kinks territory. Principal songwriter Dave Hamelin has vacated the drumstool and has taken a place among the band’s frontline (his place at the skins has been superbly filled by the expressive Julien Blais). What’s more, Hamelin shows himself to be an excellent singer and bandleader, and a visual and sonic counterpoint to vocalist Tim Fletcher. While Fletcher’s vocals on Logic were all about cool, Hamelin is always okay with losing his cool – he’s impassioned, straightforward, and compelling.

“Destroyer”, the lead single on Without Feathers, shoots the works: funky, distorted Wurlitzer, ragged classic-rock guitar, Hamelin’s manic (and often infuriated) yelp, and an enthusiastic high school brass section blaring away on the transcendent chorus. It’s half a kiss-off, and half a threat, and Hamelin delivers it like he’s handing down a sentence. The horns begin by punctuating and amplifying his vitriol, but by the end of the song, they’re swinging – breaking out from the background of the mix with exuberance. This is about as far away from the stale air, smoke, and dim lights of an arch rock club: this is woodsy, bright, intensely melodic, and unashamedly musical.

In fact, The Stills are so assured of their new status as rock and roll big brothers that they’ve put a high school band in their video. The “Destroyer” clip opens with an establishing shot of a Montreal high school – and soon, we’re shown inside, through the corridors and open doors, and into an auditorium. The Stills play, unpretentiously, on a performing-arts HS stage; there, they’re accompanied by the casually-dressed school band, blowing their horns in loose formation and hammering away on the timpani. Gone are the skinny ties and the rock-star threads, replaced by comfortable clothes and easy camaraderie between the musicians. No visual distinction is drawn between the hipster-favorite band and their high school compatriots. All of the musicians play as equals, and share the wide stage without dissonance. This is the stance that the new Stills now proudly take: arm in arm not with scenemakers or indie rock cognoscenti, but with kids with talent and instruments, and a wild desire to reach the cheap seats.

We are thrilled as always to be working with our good friends at VICE Records to bring you another wonderful installment from The Stills. We have plenty of copies of Without Feathers for all of your on-air giveaway needs, so please don’t hesitate to get in touch. The band will also be performing shows in select markets throughout the month of June. If they are coming through your area and you would like to see them live or set up a video interview or ID, please let us know. If you need more info, call Andy Gesner at 732-613-1779 or e-mail us at info@HIPVideoPromo.com. You can also visit www.TheStills.net to find out more about The Stills.

For info on the previous Stills’ video, “Lola Stars And Stripes”, click HERE