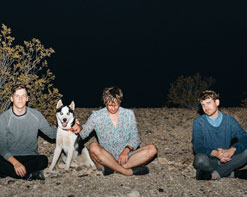 Being No One, Going Nowhere, the title of STRFKR’s fourth album may seam bleak at first. But hold it in your head a minute, feel its weight, and you may recognize the phrase for what it is: a goal. In the era of the personal brand—amid the FOMO Age—it’s increasingly hard to shed a stifling sense of self, or to just be in the moment that you’re in. Well, consider this an invitation to get blissfully insignificant. That’s what STRFKR founder Joshua Hodges aimed to do when he exiled himself to the desert to create this record, but he returned with his most significant work yet: a set of darkly glistening dance songs rife with sticky beats, earworming hooks, philosophical heft, and bittersweet beauty. Today, we present you “Open Your Eyes” as exhibit A.

Being No One, Going Nowhere was born in Joshua Tree after Hodges packed up his Los Angeles apartment and moved to that tiny Mojave outpost under the great big sky. “It came together for me in the desert,” he says. “Out there, it’s easy to feel small and slow.” None of which is to imply that STRFKR is drifting along aimlessly. To the contrary, Hodges crafted this album’s dance bent with the stage in mind. The live setup these days includes a custom-made LED wall and a homemade light show that syncs with the rhythm of the songs (also, the occasional crowd-surfing astronaut and band-in-drag). Plus, he camped out at the house of producer Jeffrey Brodsky (Yacht, RAC) for a week and a half, working all hours to ensure Being No One, Going Nowhere sounds as crisply booming over PAs as it does in headphones.

Likely inspired by time spent in Joshua Tree, the new video for “Open Your Eyes” takes place in the remote, arid California desert. What would you do if a pair of aliens disturbed your rest and relaxation outside of your trailer just to inform you that “your planet has been scheduled for demolition”? If STRFKR is calling the shots then there would be an epic battle between our hero and the space invaders. Well, maybe not epic battle. Let’s call it a best out of five skill competition. A bike race, marksmanship competition, hot dog eating challenge, and poker match end in a 2-2 draw. Since it’s “his turf, his rules,” there’s one last contest up his sleeve. Fast forward about 25 shots of alcohol and the alien overlords have been vanquished and the planet lives to see another day thanks to this real American hero.

Few bands are able to create videos that are simultaneously lighthearted and visually enticing like STRFKR. We’re all very excited to have them back on the scene, and would love to hook you up either with a copy of Being No One, Going Nowhere, or to catch them on tour when they come to your town this fall! Please contact Andy Gesner and the HIP Video Promo team at (732)-613-1779, email info@HIPVideoPromo.com. You can also visit www.STRFKR.com or www.PolyvinylRecords.com for more info on STRFKR.

For info about other STRFKR music videos, click HERE