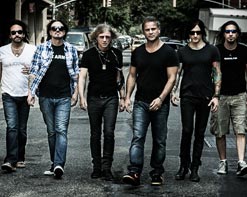 Contemporary classic rockers, The Dead Daisies, are back again with their new video for “Face I Love” –a tribute to their fans from around the globe. The Dead Daisies were formed by singer-songwriter Jon Stevens and guitarist David Lowy in 2012. The 2014 lineup includes Jon Stevens(Noiseworks/INXS) on vocals, David Lowy (Mink/Red Phoenix) on guitar, Richard Fortus (Guns N’ Roses/Psychedelic Furs) on lead guitar, Marco Mendoza (Thin Lizzy/Whitesnake) on bass, Dizzy Reed (Guns N’ Roses/Hookers & Blow) on keys and the new addition of Brian Tichy (Ozzy Osbourne/Billy Idol) on drums. The Dead Daisies sophomore effort, Face I Love, was released on August 5, 2014.

Proven a haven for creativity amongst the rock community, The Dead Daisies have an open membership policy and revolving alumni include Frank Ferrer (Guns N’ Roses/Psychedelic Furs), John Tempesta (The Cult/White Zombie), Charley Drayton (The X-pensive Winos/The Cult), Darryl Jones (The Rolling Stones). The Dead Daisies eponymously-titled debut (released August 2013) has sold more than 20,000 downloads and features the single, “Lock ‘N Load” (ft. Slash) and was voted #15 in Classic Rock Magazine’s Top 100 songs of 2013! In 2013, they played more than 100 dates including headlining the Festival Stage on the 25-city Rockstar Energy Drink Uproar Tour, opening for ZZ Top, touring with Aerosmith, winding up the year with an epic sold-out show at The Barby in Tel Aviv, Israel. The Dead Daisies have spent most of 2014 on the road playing to more than 600,000 music fans across the globe including festivals as well as recent tours over the summer with Bad Company and Lynyrd Skynyrd, and in August with KISS and Def Leppard.

“Face I Love” is the first single from their current EP which released in August finding a welcome home at Mainstream Rock, currently in the top 25, and the single currently boasts more than 5000 spins in just 7 weeks. The video features photo submissions from more than 5000 fans globally via the “Face I Love” App which launched the single and invited fans to upload pictures of themselves, or any face they love, to participate in a series of events as well as a contest which included a trip to join the band on the road. Directed by Israeli filmmaker Gil Elkrief and Israeli Animator Moshe Zilbernagel, “Face I Love” was pieced together during a very tumultuous time for the filmmakers as they are currently in hostile territory. The video includes live performance footage, more than 80 video clips, 200 tour photos and quite a bit of modern technology to bring it creatively together with a tornado!

Here are HIP we are so psyched to be working with The Dead Daisies and Spitfire Music to bring you another epic clip by a band with such a rich and elaborate pedigree. Please feel free to contact Andy Gesner and the HIP Video Promo crew at (732)-613-1779 or email us at info@HIPVideoPromo.com . You can also visit www.TheDeadDaisies.com/ for more info.