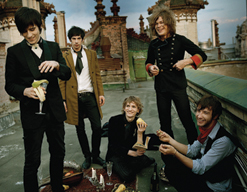 Hello music lovers! It’s Andy Gesner from HIP Video Promo here with the latest clip from our favorite gang of Central European noisemakers: The Moog! The foremost rock band from Hungary has gone on to build audiences on three continents and toured all over the globe. These five rockers from the hippest neighborhoods of Budapest are citizens of the world! Still, we’d be remiss if we didn’t mention their latest achievements: they’ve been nominated for their second MTV Europe Video Music Award–the spooky clip for “You Raised A Vampire,” their last single, which topped the Hungarian video charts upon its release (reaching # 2 at MTV Hungary). Meanwhile, back in the States, their cult continues to grow: Razzmatazz Orfeum, their sophomore release, earned the band a feature in Spin and a rave inAmplifier magazine. Absolute Punk.net calls The Moog “a band ready to scale to unimaginable heights”.

And critics agree: the new single, “When I See You,” is a real standout. In concert, it’s become a highlight as an audience sing-a-long with its hooky, melodic whoo-hooing chorus, and it’s been a launching-pad for the group’s instrumental pyrotechnics. Although The Moog is named after a famous analog synthesizer, many of the band’s best-known songs are six-string workouts. But “When I See You” kicks off with the song’s irresistible hook played by charismatic frontman Tonyo Szabo on his analog synth Moog Little Phatty, and in the wild instrumental section, the Moog (the instrument!) and the lead guitar play in unison. The result is harmonically-rich and sonically-arresting; it’s guaranteed to leave your head spinning and the sound will happily be stuck there for days.

Szabo keeps his Little Phatty at hand in the clip for “When I See You.” Like the rest of the band, he’s crammed into a tiny house on the set of a theatrical production. Undaunted by the close quarters, The Moog play just as ferociously as they would at any gig. But it’s unclear whether the theater crowd can hear what they’re doing – they might be too distracted by the evil clown and grizzly bear who are battling it out on the boards. The audience members themselves are bizarre in their own right: nuns, robots, monsters, people dressed as insects, leering grownups and oddly-attentive children. Szabo and The Moog peer at them from the window of their little house, pinned in, apprehensive, and anxious to escape.

Directed by Anthony Ernest Garth – the man responsible for the weird and dreamy clip for the White Stripes’ “Hotel Yorba” – the “When I See You” video takes full advantage of Los Angeles’s world-renowned Bob Baker Marionette Theater. The clip features some truly amazing puppets, including a chorus line of jaunty ants and two singing watermelons. The pair of fruits certainly seem to know the song, and nobody “sings along” on the chorus more enthusiasm than they do! But while the marionettes are adorable, the pugilists are menacing, and the audience is more than a little terrifying, the five members of The Moog are still the stars of the video: performing “When I See You” (and bouncing off the walls of their besieged shack) with good humor and irrepressible energy.

We are proud to present the fourth video from The Moog, on behalf of Art Bourasseau and the rest of MuSick Recordings. Don’t hesitate to reach out to us if you need anything to help you support the “When I See You” video! If you need more info, call Andy Gesner at 732-613-1779 or e-mail us at info@HIPVideoPromo.com. You can also visit www.myspace.com/moogband,www.Moog.hu or www.MuSickRecordings.com to find out more about The Moog.