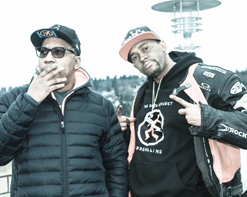 Straight out of Seattle comes The Rush Project, part of the Magmata Records label. They are the perfect example of Seattle’s knack for supplying the music world with the new west coast sound. The Rush Project is a diverse Hip-Hop effort that exists between distinctive rock and hip-hop genres while never losing its urban edge. This is a cult record release in the making, with pulp northwest themes. Relevant to their sound, the title of their brand new video is “Adrenaline.”

Programmers and viewers may remember the unique sound and mind-bending visuals of The Rush Project from several years back. For those who don’t, a little refresher… The Rush Project is comprised of Rush Rydah and DJ Communion.

Rush Rydah, aka veteran performer Darcel Perkins, got his start backing up acts such as P.O.S., Attitude Adjuster, and The Elite. He further honed his performance and mic skills while traveling on many national tours with Northwest legend and Grammy winner Sir Mix-A-Lot. Communion, aka Dmitri Antos, started out in music as guitarist, singer and songwriter for electro-industrial group “Pale”. Antos describes himself as an Electronica DJ, classically trained vocalist and composer. The two take the listener through a series of emotional peaks and valleys, reminiscent of a well-scored movie soundtrack.

Throughout “Adrenaline” a booming voice declares repeatedly, “They want adrenaline.” Good news. The Rush Project delivers in a big way in their new video. “Adrenaline” is exactly what you would expect, a heavy dose of energy and excitement. Performance footage made up of fast cars, extreme rides, bumping live crowds all come together to charge up the video. Rush Rydah keeps the flow going both on stage and with the band behind him. Look closely and you will see producer Outtasite (The Feelings Hijackers) getting in on the action as well!

We are all super psyched to have The Rush Project back on board with their new video “Adrenaline!” We would love to see you support this video in all its heart thumping glory. So please get in touch and let us know what we can do on our end to get it into your programming. Please contact Andy Gesner and the HIP Video Promo staff at (732)-613-1779 or email info@HIPVideoPromo.com.

For info about The Rush Project’s other music videos, click HERE