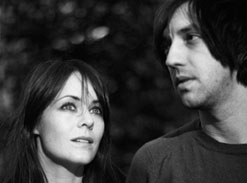 THE HUNDRED IN THE HANDS

In “Tom Tom,” you had The Hundred In The Hands, comprised of On The Radio collaborator Eleanore Everdell and former Boggs member Jason Friedman, at the forefront of the video, sauntering an empty warehouse with images projected around them while they captivated you with a taste of their music. The Brooklyn-based duo have taken the backseat in “Pigeons,” with the video focusing in on a dainty girl with a pixi hair cut who seems to have partied a little too hard for her own good.

The video for “Pigeons” finds this girl completely wasted and vomiting – sparks, that is. The moment you brace yourself for the unnecessary gore, sparks shoot out from her mouth, and she gets hosed down by a fire extinguisher more than once. Though she starts out at a party and stumbles out into the street, each time falls, she transcends space and time by transporting between the two scenarios. Her substance-induced hallucinations become a full body experience, as you will see. Eventually, when she gets hit by a car, she bursts into fireworks and wakes up in the broad daylight, unsure of the kind of night she’s endured earlier. Amidst all of this, The Hundred In The Hands are innocent bystanders, somewhat acting as the girl’s conscience.

While Everdell’s voice is still haunting, “Pigeons” is a far more upbeat taste of what The Hundred In The Hands are capable of. This is slightly in part thanks to the band collaborating with the respectable British electropop producer Richard X (who has worked with Kelis and the Sugababes, to name a few). You can find the track off of The Hundred In The Hands’ self-titled debut album, set to release at the end of this month.

The clip for “Pigeons” has already locked in great Internet buzz because of sites like Pitchfork.com and #. As always, we’re honored to be working with The Hundred In The Hands and Warp Records again. If you need more info, call Andy Gesner at 732-613-1779 or e-mail us at info@HIPVideoPromo.com. You can also visit www.Warp.net to get more info on The Hundred In The Hands.

For info about The Hundred In The Hands’ previous video, “Tom Tom” click HERE