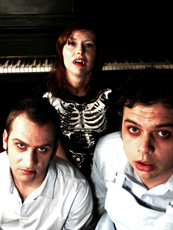 The heat is on! It’s Andy Gesner and the staff here at HIP Video Promo checking in with another great video. We’re thrilled to be continuing our work on behalf of one of the most intriguing pop bands around – the genre-defying, risk-taking, formidably talented The Heavenly States. San Francisco’s most daring tunesmiths are back once again with another new album and the band has matched “Pretty Life”, its lead single, with a spectacular animated video worthy of its intricacy and passion. It’s our great pleasure to introduce audiences worldwide to a true rarity: a four-piece pop/rock band that can genuinely be called singular.

We won’t find out for sure until the album is officially released in July, but if “Pretty Life” is any indication of the direction The Heavenly States have taken on Black Comet(on Australian-based Baria Records), it’s going to be a pretty wild ride. The single is at once catchier, more immersive, and more rocking than anything they’ve done before. “Pretty Life” sails through a gorgeous, placid verse before exploding into a gritty chorus that’s breathtaking in its punk immediacy. The commanding Nesseth has never been the sort of pop singer or guitar player who is shy about cutting loose, but here it seems like he can barely control himself; even during the song’s more restrained sections, he growls and barks with an urgency bordering on mania, and slams away at his scratchy guitar with a surplus of neurotic energy.

The result is a genuine piece of neo-garage psych rock, and one worthy of the genre’s gloriously seedy antecedents. None of the fashionable, studied garage revival for The Heavenly States – no, these guys are far too nervous (not to mention too talented) to give you anything but the genuine article. Bassist Matt Dickey and drummer Jeremy Gagon lock into a ridiculously propulsive groove, Nesseth punctuates the chorus riff with some remarkably expressive rock n’ roll shouts, and secret weapon Genevieve Gagon ices the cake with a choppy, percussive synth part that sounds like it was recorded on the oldest, dirtiest Mellotron in the world.

Fans of the quartet know that their videos are almost as inventive and intelligent as their music: any band clever enough to have built puppet simulacra (the unforgettable “Car Wash”) and shot a video on featuring their “performance” is one with a visual and conceptual sense worth celebrating. But with the “Pretty Life” clip, The Heavenly States have really outdone themselves. Here, through the outstanding work of Art Director Kristoffer West Johnson, the band is fully animated. This is no Hanna-Barbera show; these cartoon figures perform the song with wild intensity. Faces are drawn in thick black lines and bright reds, and determination and scorn is etched into Nesseth’s face. Gagon, by contrast, is depicted as hunched over her instrument, hammering away at the keys with single-minded determination.

Interspersed with the animated footage of The Heavenly States is a disturbing and ever-shifting extraterrestial scene. The camera races through the stars, twisting and somersaulting at intoxicating speed. As representations of the band’s ‘flying-sparkplug’ icon (check the group’s website to see what I mean) swirl through the clouds, a space skeleton plays with a cartoon earth. In an image that’s as provocative as any we’ve seen in a video this year, the skeleton slams the edge of a gigantic guitar down upon the world until it cracks from top to bottom. A smaller skeleton emerges from the core of the earth, and, like Michelangelo’s The Creation, touches fingertips with its liberator. The bones break apart, and scatter across space like giant pieces of driftwood.

We couldn’t be happier to work with Eugene Bari and the amazing staff at Baria Records again! The Heavenly States will be touring the West Coast with Smog (Drag City Records) this summer, and will be happy to accommodate any interested programmers with video interviews and ID?s! We will also have copies of the new CD Black Comet as soon as it is released! If you need any more info, call Andy Gesner at (732) 613-1779, or email info@HIPVideoPromo.com.