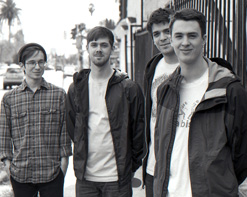 This has been an absolutely solid season for punk rock music. It’s Andy Gesner and the HIP Video Promo crew with a post hardcore follow up from one of this year’s breakout artists in the genre. Title Fight has definitely had a good year with their flawless hard hitting collection of raw punches that is the album Shed. Being the impactful title track, “Shed” will finally help establish these young guns as a staple of modern post hardcore scene, which definitely needs saving from the pop hybrids it’s been recently injected with.

Title Fight went from local Pennsylvania heroes to national breakout stars with the release of their vicious record Shed. If you need proof, just look at your local newsstand this October and you’ll see the band on the cover of Alternative Press, being one of the featured groups of this year’s AP Tour with Four Year Strong and Gallows. The new album was one of the magazine’s most anticipated this year and received 4.5/5 stars. Title Fight has also had a constant and prominent presence on AbsolutePunk, Punknews, Blunt Magazine, Kerrang!, and Rock Sound, who all gave Shed high scoring reviews. The band has built up a cult following by touring with renowned artists like New Found Glory, Bayside and Senses Fail, while also becoming a regular on the hardcore festival circuit playing such fests as This Is Hardcore, United Blood and Sound and Fury. The band recently did a Japanese tour with H20 and was selected as one of SPIN’s “25 Must-Hear Artists at Bamboozle”

“Shed” is the killer follow up single to “27,” which some of you have had the pleasure of moshing to a few months ago. Title Fight once again crank it to 11 in this no-holds-barred track that will instantly remind you of the good ol’ hardcore days of the last two decades. The song is driven by singer Jamie Rhoden’s signature rasp, coupled with massive and relentless drums and guitar bashing. The best thing about Title Fight is that they always incorporate a sense of melody and never tread into the clichés of straight forward hardcore or punk, instead resembling the genre’s well known versatile acts like Jawbreaker, Lifetime, and, more recently, I Am The Avalanche. The video is once again pleasantly low-fi, featuring footage of the band playing and wreaking havoc in the woods. The whole clip has a yellowy vintage feel to it and is spliced with breakups of tape and other distortion effects to help make the clip seem aged.

The band never hides their back-to-basics approach and has gained a lot of attention because of it. The record reached the #8 spot on the “New Artists Chart” on Billboard, and we hope you will join in on the action this fall. While winter maybe the season to be merry, this fall is the time get riotous! The folks at SideOneDummy and Title Fight have provided us with lots of copies of Shed for your listening pleasure and on-air giveaway needs. If you need more info, call Andy Gesner at 732-613-1779 or e-mail us at info@HIPVideoPromo.com. You can also visit www.SideOneDummy.com or www.TitleFight.tumblr.com to find out more about Title Fight.