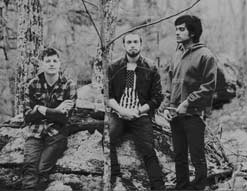 The “Ambling Alp” video was a wild techno-primitive hallucination: hooded horsemen, prone naked bodies, stark desert scenery, and faces melting into pixilated slime. It took the Internet by storm, and announced (as if anybody really doubted it) that the new Yeasayer album would be an unforgettable trip. The followup clip for “O.N.E.” picks up right where “Ambling Alp” left off — it’s a shape-changing, body-morphing, day-glo, twisted-futuristic masterpiece. Longtime MTV viewers will be reminded of classic clips by Wall Of Voodoo, Duran Duran, and Split Enz; newer fans will simply be astonished. “Ambling Alp” was a revelation to be sure; with “O.N.E.”, Yeasayer joins the ranks of the truly visionary music video artists. We can’t wait to see what they do next.

And we’re not alone in our enthusiasm. The heralded ODD BLOODhas thrilled the previously committed and turned thousands of new fans on to Yeasayer’s experimental pop. The album hit the Top 100 charts on three different continents, and the group celebrated with a widely-viewed — and enthusiastically reviewed! — performance on the Jimmy Fallon show. Mass demand for Yeasayer’s music will take the group around the globe in 2010: right now, they’re tearing through Europe, playing club stages everywhere from Zurich to Madrid. In April, they’ll be touring America from coast to coast (including a two-night stand at The Parish in Austin) before returning to Europe in May for festival season.

“Ambling Alp” was a terrifically catchy song and an arresting choice for a lead single — but the house-rocking “O.N.E.” has a legitimate chance to put Yeasayer on the mainstream pop charts. In Rolling Stone, Will Hermes calls “O.N.E” the most “killing jam” on ODD BLOOD, and describes it as “a dubby blast of samba-spiked funk that finds singer Anand Wilder wrestling with a love jones like a schizo Daryl Hall…. all held together with thundering, radio-ready drums and choruses that wouldn’t sound out of place in a Depeche Mode song.”

A song as splashy as “O.N.E.” needed a video to match, and Radical Friend has complied with a clip that’s alternately amusing, hypnotic, and downright terrifying. The lead character is human — maybe. His head, however, is subject to some bizarre morphing effects; when first we see him in his car, it appears to be congealing from a mass of shapeless mercury. Alien or not, he’s got a taste for far-out pop, and he’s in luck: Yeasayer is playing in a strange, futuristic (or is that post-apocalyptic?) club. Their instruments are bold, bizarre designs: the microphone is pure translucent crystal, the synthesizers appear to be composed of glowing pyramids, and the guitar is an assembly of radiant geometric objects. Anand Wilder sings from behind a chain-link mesh. Besides dancing to the music, the main activity inside the club is a game of chance played on a semi-electronic board. The protagonist begins to play — but as he does, his head is colonized by a dozen different faces. It’s an effect that needs to be seen to be believed. The bouncers at the club have seen it all, and they nonchalantly toss the doppleganger from the establishment.

Big props to Secretly Canadian for bringing us this colorful piece of cinema! If you need more info, call Andy Gesner at 732-613-1779 or e-mail us at info@HIPVideoPromo.com. You can also visit www.SecretlyCanadian.com or www.Yeasayer.net to find out more about Yeasayer.